Heat aren’t rushing to close the books on this season 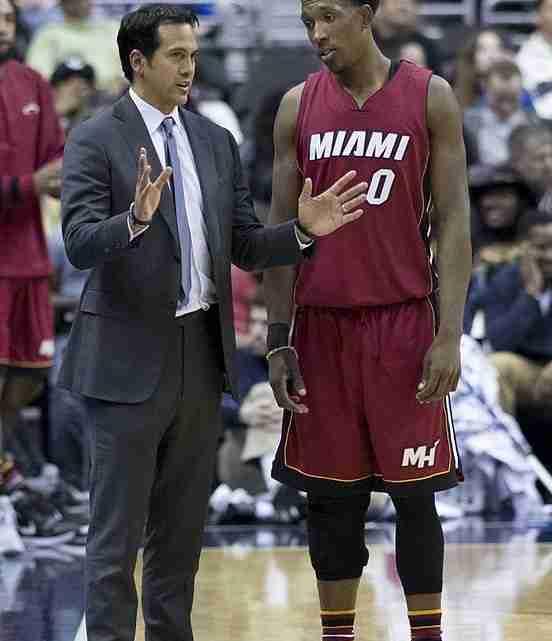 MIAMI (AP) – The NBA draft lottery is in May, the draft happens in June and free agency arrives in July.

The Miami Heat aren’t hurrying toward any of them.

Changing from the normal end-of-season schedule, the Heat have told players – whether they’re about to become free agents or not – that they’re welcome to stick around and keep working over the coming weeks. So while Monday was the start of the traditional exit meetings with coach Erik Spoelstra and team officials, it wasn’t a true parting of ways for the offseason.

“It’s cleanup day, not clean-out day,” Spoelstra said. “Lockers are still going to be there. We want our guys to still feel at home here. Free agency is going to happen. A lot of our players are going to have free-agent possibilities or opportunities in July. But that’s July.”

So the nameplates will stay on the lockers, the practice gear won’t get packed up for the summer and sneakers aren’t being shipped to offseason homes quite yet. While a few players are in the midst of finalizing offseason plans out of town – point guard Goran Dragic is returning to his native Slovenia and will play for his national team this summer – some are already thinking about getting back to work.

“Why not? It’s Miami,” shooting guard Dion Waiters said. “What other place is better than this in the summertime? I think it’s great that guys should stick around and take advantage of it while you’re here. … I’m going to be around.”

Waiters took a $2.9 million deal for this season, saying it was a bet on himself – and it’s likely going to pay off, after Miami went 27-19 with him in the lineup. Free-agent-in-waiting James Johnson is also likely going to get a huge raise after the best season, by far, of his career. Luke Babbitt will be another free agent and Wayne Ellington has a team option.

Some changes are coming, though if this core of Heat players had its way the team wouldn’t look much different next fall. Dragic said the team that went 30-11 in the second half of this season, if healthy, could make a run at big things next season.

“They know we want them back,” Dragic said. “They are a big part of this team. Everybody’s so close, it’s going to be hard for them to choose some other team, too. Hopefully they stay.”

Not making the playoffs was clearly painful, though some said things began returning to normal over the weekend. NBA rebounding champion Hassan Whiteside went over to Tyler Johnson’s house for some visiting and snapchatting, players and coaches donned bunny ears at an end-of-season team party – it was Easter weekend – and a few even watched some playoff games.

There isn’t a lot of looking ahead, at least for now.

“There’s a long way until this summer,” Spoelstra said. “It’s OK to still reflect and embrace how unique this season was. I think so often all of us fall prey to `what’s next’ and `what is the future’ and you’re not able to enjoy and be present. You miss a lot of great things.”

Ellington said he’s thinking he will be back with the Heat, and Waiters – while cautioning that he can’t predict the future – indicated that he’s already thinking about staying with Miami.

If so, most of those lockers won’t need to be cleaned out for quite some time.

Previous post Wildfires burn over 126,000 acres across Florida this year