Pat Riley: Heat growth up to the team players 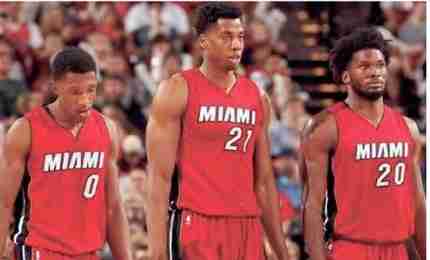 MIAMI – Pat Riley has a trip to his California home awaiting, followed by a vacation with his wife.

He can now relax a little. The 2017-18 Miami Heat are going to look a lot like the 2016-17 Miami Heat, and the team president is just fine with that arrangement. Riley said Monday he thinks bringing back now-former free agents Dion Waiters and James Johnson and signing them to four-year deals, combined with the surprise addition of Kelly Olynyk, gives Miami a real shot at picking up where it left off last season.

The way he sees it, now it’s up to those signees to deliver on promises.

“I think in training camp, they have to look at it with great foresight for the future but also they have to back up their words somewhat with their play,” Riley said Monday. “So it’ll be very interesting this year when we go to training camp to see where their heads are, and I’m convinced they’ll come ready.

They think they’re a good team and they’ll get it together. I’m excited about it.”

Even in a summer where Miami swung and missed at landing Gordon Hayward, Riley thinks the Heat got better in the last few days. Miami went through one of the most unique seasons in NBA history last year – it lost franchise cornerstone Dwyane Wade in the summer, started 11-30 to fall super-close to the NBA basement, then went 30-11 in the second half and still missed the playoffs.

It was a painful ending. Riley wants that pain to permeate for a while.

“As good as we were in the second half of the year, we didn’t finish the job and get that one shot at the first round,” Riley said.

There are more details for Miami to handle before the offseason business truly slows to a trickle. The Heat are still talking with forward Luke Babbitt about a return, plus have been in discussions with captain Udonis Haslem – who has been approached by other clubs, including Cleveland, to gauge his interest in lending his veteran expertise elsewhere.

“We hopefully will get Udonis back,” Riley said.

Anything Miami does now would almost certainly have to be a minimum deal. Riley said the Heat spent every dollar available under its salary cap, lauding Heat senior vice president of basketball operations and general manager Andy Elisburg _ considered one of the NBA’s top cap gurus – for his expertise there in not only helping Miami land Olynyk but keep Waiters, Johnson and Wayne Ellington.

“His number-crunching … he’s the star of this whole thing,” Riley said, adding that the Heat intend to hang onto their $4.3 million exception for now.

Miami had Plan A and Plan B going into free agency. Plan A was to land Hayward and figure everything else out on the fly. Plan B was, if Hayward decided to play elsewhere (and he did, picking Boston), to go all-in on retaining Heat free agents.

Riley was flying back to Miami from meetings in California when he and the Heat brass learned Olynyk was going to be a free agent. That deal came together quickly, and Riley is already convinced the former Celtics backup forward was the right move to pair with center Hassan Whiteside.

“He’s a perfect fit with Hassan,” Riley said. “He can play with him and we can play him with other guys.”

Whiteside and Waiters have both said they expect the Heat to be in the Eastern Conference mix next season, and Riley doesn’t disagree. Cleveland – even with its front-office dysfunction being a big story this off-season – still has LeBron James and therefore still has the talent to be considered the best in the East.

Boston will be there again. Washington, Toronto and Milwaukee also think they’ll vie for top-four spots.

Miami figures to be there as well.

“There are other teams in the conference but we feel good,” Riley said. “If you go into the season healthy, in shape and feeling good, and there’s a commitment to one another, the sky’s the limit. You have to go for it.”