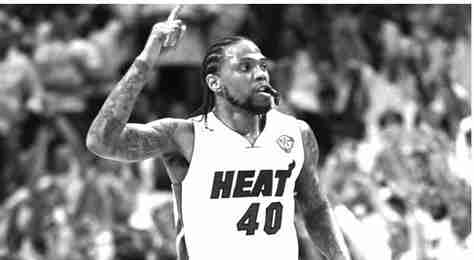 The three-time NBA champion has signed a one-year, $2.3 million deal to remain with the Heat for what will be his 15th season.

Haslem was already the longest-tenured player in Heat history, with all of his NBA seasons coming from his hometown team.

Among active players, only Dirk Nowitzki, Tony Parker and Manu Ginobili have spent the entirety of a career spanning at least 15 years with one franchise.

“It is a great, great, day to have Udonis Haslem sign a contract for his 15th season with the Miami Heat,” team president Pat Riley said Thursday, when the contract was announced. “He isn’t just Mr. 305, he is a true patriarch of the team. Today we are proud to announce that he is back to lead the Heat again.”

Haslem and Dwyane Wade are the only players who were on all three Heat championship teams, 2006, 2012 and 2013. Haslem is extremely popular with the Miami fan base, and 150 children attending a Heat summer basketball camp erupted into cheers when it was announced last Thursday that he had re-signed.

Haslem – the longtime captain of the Heat, going into his 11th season in that role heard interest from other clubs this summer, though he said all along that he wanted to be in Miami and has expressed a desire to play in the 2018-19 season as well. He appeared in 16 games last season, though his leadership has been something the Heat have raved about for years.

Undrafted in 2002, Haslem spent his first pro season in France before signing with the Heat as a free agent in 2003. He’s now on his sixth contract with the Heat.

Haslem is Miami’s career leader in rebounds with 5,701, and has appeared in 830 regular-season games – 25 shy of Wade’s record. He’s also seventh on the Heat scoring list.

Next post How women in leadership roles can change the workplace