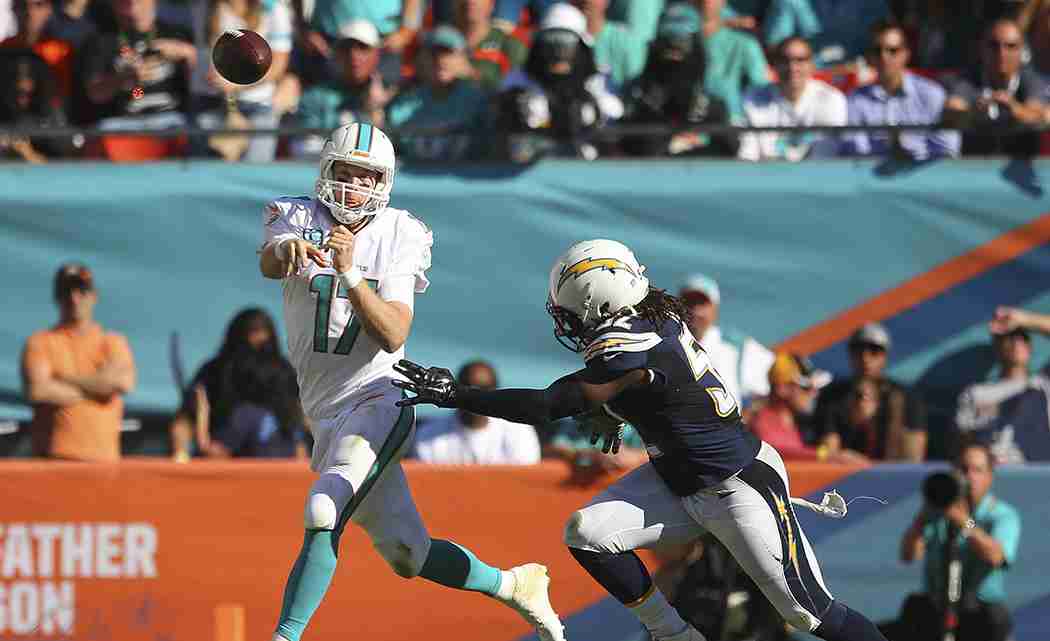 MIAMI GARDENS, Fla. (AP) — San Diego mounted a handsome drive to start the game, moving to Miami’s 22, and Chargers coach Mike McCoy was so impressed he decided against kicking a field goal on fourth- and-1.

Instead, Branden Oliver ran up the middle and got stuffed, losing a yard to give the Dolphins the ball.

McCoy didn’t see the fourth-and-1 failure as a pivotal moment.

“There’s a lot of football after that,” McCoy said. “That’s one play. … The easiest way to say it is in all phases, we got beat.”

Here are things to know in the wake of a rout that sends the two teams in opposite directions:

RECORDS: The Dolphins (5-3) earned their third consecutive victory as they began a stretch of four games in a row against playoff contenders. Receiver Mike Wallace said he’d prefer the rest of the NFL not take note of Miami’s latest win.

“Hopefully not, so we can do the same thing next week,” Wallace said. “Hopefully, nobody ever catches on. Hopefully, people just keep taking us easy, so we come away with wins like this.”

The Chargers (5-4) lost their third game in a row.

“We’ll get this back on track, I promise you,” McCoy said. “No doubt in my mind.”

“We’ll find out what we’re made of,” Rivers said.

San Diego was shut out for the first time since 1999, while Miami earned its first shutout since 2006.

EMOTIONAL VICTORY: Miami’s best performance under third-year coach Joe Philbin came after he missed two days of practice leading up to the game to be with his father, who died Friday in Massachusetts.

Following a moment of silence for the elder Philbin before kickoff, the Dolphins won one for their coach.

“I really have to give our assistant coaches and our players a ton of credit,” Philbin said. “I kind of just showed up for the game.”

Afterward, Philbin’s shirt was soaked, thanks to a sports-drink dousing by his players.

“We promised him we would play our best game of the year, and we did that for him,” guard Mike Pouncey said.

THE BETTER QB: Miami’s Ryan Tannehill had a career-high passer rating of 125.6 and called it a day after three quarters. He went 24 for 34 for 288 yards with three touchdowns and no turnovers, and ran for 47 yards on four carries.

While Tannehill flourished, Miami’s front four dominated the Chargers’ line, harrying Rivers into a lost fumble and three interceptions, two to Brent Grimes. Rivers passed for only 138 yards and had a quarterback rating of 31.0, his lowest since 2007.

Rivers went to the bench for good late in the third quarter, and the Dolphins ended his Chargers-record streak of at least one touchdown pass in 28 consecutive games.

“I was terrible,” Rivers said. “When the quarterback’s terrible, it’s hard to win.”

CHARGERS DROUGHT: San Diego remained winless in South Florida since January 1982, a stretch that includes a drubbing by San Francisco in the 1995 Super Bowl and eight consecutive losses to the Dolphins.