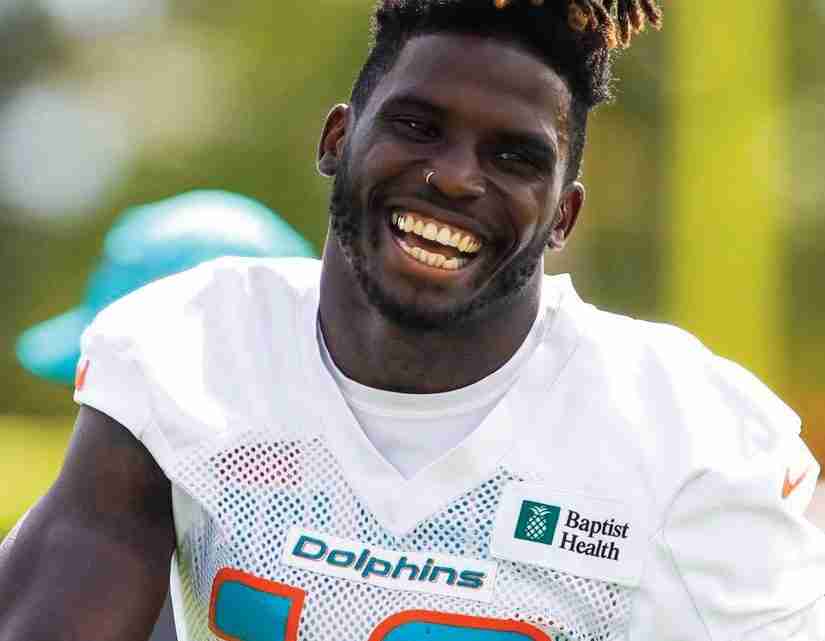 Miami Gardens, Fla. (AP) – It’s been nearly four decades since the Miami Dolphins ﬁnished a season with the highest-rated passer in the NFL. And they’ve never had a receiver lead the league in yards.

There was a now-infamous video that the Dolphins posted to Twitter on May 10, showing Tagovailoa – in a bucket hat and shorts, not a helmet and pads – dropping back and sending a pass to Hill. The pass was underthrown, Hill was basically standing still when he caught it and tweeters who thought it was an ominous sign for the season reacted predictably.

“Delete this,” some wrote.

The tweet is still standing. And Tagovailoa and Hill are standing taller than all others.

The oft-criticized Tagovailoa is the current leader in NFL passer rating; 112.7, which is 3.2 points higher than second-place Patrick Mahomes of the Kansas City Chiefs. Hill is the runaway leader in NFL receiving yards; 961, which is 197 more than Buffalo’s Stefon Diggs and puts him on pace to become the ﬁrst player in league history to amass 2,000 yards receiving (though, yes, the 17-game season also helps in that regard).

And the Dolphins are now winners of two straight, rallying to top Detroit 3127 on Sunday to improve to 5-3 and remain squarely in the AFC playoff mix. “I feel like we can be light years better,” Hill said.

“I’m seeing a lot of improvement across the board,” Dolphins coach Mike McDaniel said.

The Dolphins are 5-1 when Tagovailoa plays, 5-0 when he’s healthy enough to ﬁnish games.

They lost at Cincinnati when he had the frightening concussion and needed to be taken off the ﬁeld on a stretcher, then lost their next two games to the New York Jets and Minnesota Vikings with him sidelined.

It’s not as simple as Play Tua, Win Games. The defense gave up 64 points in the two games he missed, an obvious factor in those decisions.

But Tagovailoa’s two best games of the year – and of his career – came when the Dolphins were in trouble.

In Week 2, he had four touchdown passes in the ﬁnal 12:12, six of them in the game, as the Dolphins rallied from a 21-point fourth-quarter deﬁcit to stun Baltimore 42-38. And on Sunday, Tagovailoa had the ﬁrst three-touch-down, zero-interception game of his career to help Miami erase an early 21-7 deﬁcit.

And, in similar sentiments to the ones Hill shared, Tagovailoa says he expects more.

“The greatest thing about this game is that you can never get content,” said Tagovailoa, who is averaging a league best 9.0 yards per pass attempt. “You have to continue to keep growing. We’ll go and watch the ﬁlm and look at things that we could’ve done better.”

One other thing that jumped out to McDaniel on Sunday: Alec Ingold’s posttouchdown spike, after the Miami fullback got his first career rushing TD.

“I was proud that he took advantage of the opportunity to have a nonregrettable spike,” McDaniel said. “A lot of times in the process, people that are pretty emotional, the ball will slip or it’ll be like sideways or it’s not very powerful. He had a nice connection launch. He utilized the buoyancy of the turf.”

When the head coach offers that level of analysis regarding a spike, it’s reasonable to think that his offense is clicking along just ﬁne.

The secondary. The injuries are piling up back there for Miami and with the trade deadline looming Tuesday at 4 p.m., it’s hard to imagine the Dolphins not trying to make some sort of move.

The entire passing game. Even with Hill on his record pace, his co-star WR Jaylen Waddle – who has 727 receiving yards and 17.3 yards per catch – can’t be overlooked. There were four 700-yard receivers in the NFL this season entering Monday and two of them play for the Dolphins.

The way the defense was for the ﬁrst 30 minutes on Sunday. Miami allowed 27 points and 326 yards in the ﬁrst half against the Lions.

The Dolphins then gave up zero points and 67 yards in the second half, and it was the second consecutive game where Miami pitched a shutout after halftime.

Guard Liam Eichenberg sprained an MCL on Sunday, a better-than-ﬁrstfeared diagnosis after he left the game with a knee injury.

“We know he’s going to be out. We just don’t really know how long it will be,” McDaniel said.

160: Hill has four 160-yard receiving games so far this season. That’s second most in Dolphins history. Mark Duper had six of those in 146 games. Hill has played eight games with Miami.

Players were off Monday and will be off again Tuesday. The Dolphins resume practice Wednesday for a game Sunday at Chicago.