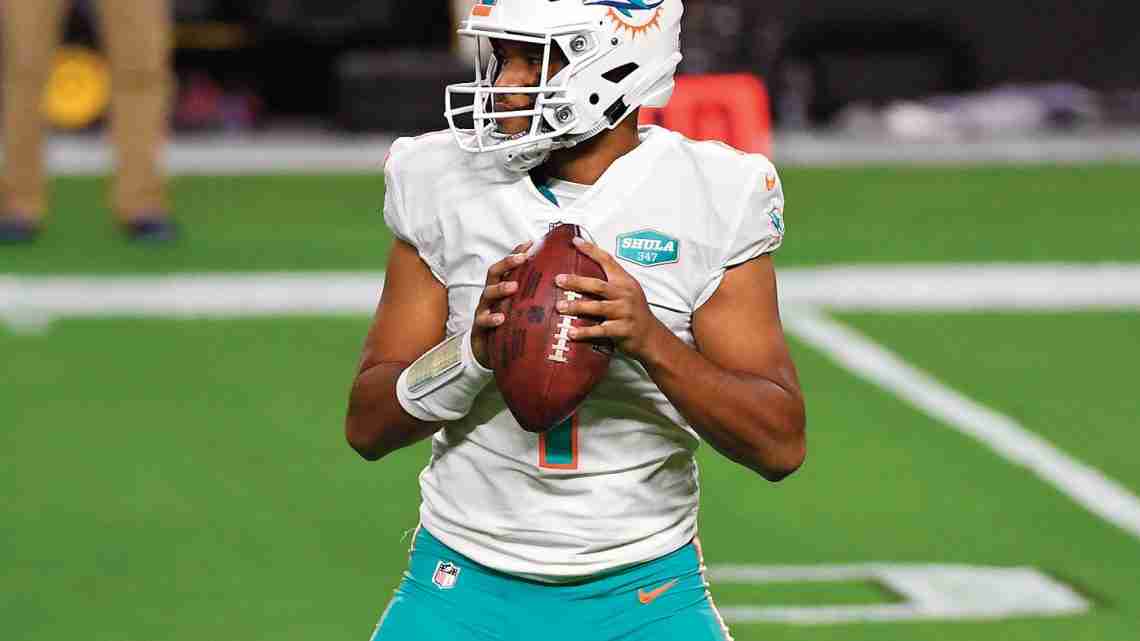 Miami Gardens, Fla. (AP) –Tua Tagovailoa was on the ﬁeld four hours before the game against the Raiders, visualizing how the Dolphins offense would operate Saturday night.

Tagovailoa, the Dolphins’ starting quarterback, made his preseason debut and played in the ﬁrst two series of Miami’s 15-13 loss to Las Vegas.

Playing with most of his starters – although receiver Tyreek Hill did not play – Tagovailoa completed 6 of 8 passes for 58 yards.

“I was really happy with Tua because he’s been having such a good camp, just in his development and ownership of the offense,” Dolphins ﬁrst-year coach Mike McDaniel said.

He was then asked about Tagovailoa’s pregame preparation earlier in the afternoon.

Jarrett Stidham, who started for the Raiders at quarterback, completed 7 of 10 passes for 80 yards and was sacked once. He threw the Raiders’ only touchdown pass on the team’s opening drive.

Tagovailoa did not lead a touchdown drive, but he connected with tight end Durham Smythe for a 10-yard gain on his ﬁrst throw of the game and found running back Chase Edmonds for a 17yard gain on the next play. The Dolphins’ offense looked unsettled on the drive, however, and was forced to punt.

“As an offense, you always want to go down and accomplish every drive ending in a score. Obviously that wasn’t the case within the two drives that we had,” Tagovailoa said. “We had a ﬁeld goal, but our job as an offense is to go down and try to put points up on the board.”

Edmonds, acquired in the offseason, showed how important he could be in the Dolphins’ offense this season. He caught two passes on two targets for 21 yards and had just 3 rushing yards on three carries, but in his most impressive play, he caught a short pass from Tagovailoa and shed a Raiders defender to convert on third down.

Tagovailoa looked comfortable and had the time he needed to make his throws, but Miami got little production in the run game with its starters on the ﬁeld. The Dolphins’ most productive runner was backup Salvon Ahmed, who ﬁnished with 20 yards and ﬁve carries.

Veteran quarterback Teddy Bridgewater replaced Tagovailoa. On his ﬁrst drive, he was penalized for intentional grounding in the end zone, resulting in a safety.

Bridgewater also made some impressive throws, including a 26-yard completion to rookie receiver Erik Ezukanma.

Dolphins rookie quarterback Skylar Thompson, who impressed in his NFL debut last week, had another solid outing, throwing for more than 100 yards, including Miami’s only touchdown – a 19-yard connection with rookie running back ZaQuandre White in the fourth quarter.

Nick Mullens replaced Stidham and was 6 of 9 for 39 yards. With the win, the Raiders moved to 3-0 in the preseason.

Dolphins cornerback Nik Needham left the game in the ﬁrst half after appearing to injure his left hand making a tackle. In last week’s preseason opener against Tampa Bay, backup cornerback Trill Williams suffered a seasonending ACL injury, and the Dolphins to signed Mackensie Alexander earlier this week.

Dolphins: Receiver Jaylen Waddle did not play, as he is nursing a minor undisclosed injury. Waddle was held out of practice this week out of precaution, though McDaniel said he expects Waddle to return during training camp. Also inactive were safety Eric Rowe, cornerback Xavien Howard, tight end Tanner Conner and offensive linemen Terron Armstead and Greg Little.

Dolphins face the Philadelphia Eagles on Saturday in their preseason ﬁnale.