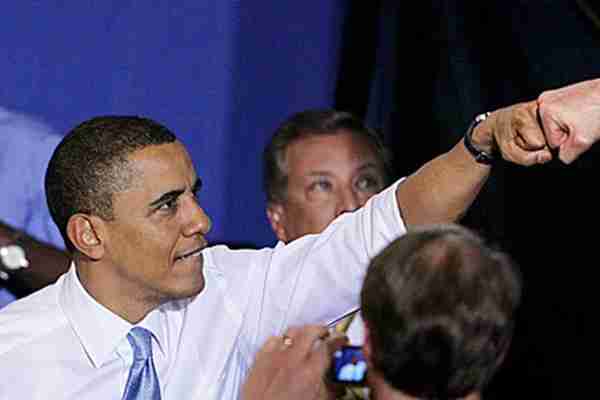 NEW YORK – When it comes to preventing the spread of germs, maybe the president is on to something with his fondness for fist bumps.

The familiar knocking of knuckles spreads only one-twentieth the amount of bacteria that a handshake does, researchers report. That’s better than a high-five, which still passes along less than half the amount as a handshake.

So fist bumps – popularized by Barack Obama and others – seem to be the wisest greeting, especially during cold and flu season, said researcher David Whitworth of Aberystwyth University in Wales.

The importance of hand hygiene is nothing new in medicine. But the researchers realized that while a lot of research focused on hands getting germy from touching doorknobs and other surfaces, only a few studies had looked at handshakes.

“And there are alternatives to handshakes. You see them on telly all the time – the fist bump and high-five and all that,” Whitworth said.

He and a student, Sara Mela, shook hands, fist-bumped and high-fived each other dozens of times for the research. One wore a glove covered in bacteria, while the other had a clean sterilized glove. After each greeting, they measured how much bacteria had been transferred.

Their results were published online Monday in the American Journal of Infection Control.

What makes the fist bump more sanitary? Mostly, it’s the smaller amount of surface area in contact between the two hands, an analysis suggests. The researchers did practice runs with paint to measure how much surface area each form of greeting involved.

“It’s a novel study,” though the results are not surprising, said Mary Lou Manning, president-elect of the Association for Professionals in Infection Control and Epidemiology. Her organization publishes the journal.

She said she hasn’t seen much fist-bumping or high-fiving in hospitals. Handshakes are more common- but they must be followed by good hand-washing, she added.

Whitworth said he hopes the norm changes. “In a hospital, you really don’t want people to shake hands. It’s an unnecessary risk,” he said.

Previous post Today, July 28, is the voter registration deadline for the primary election