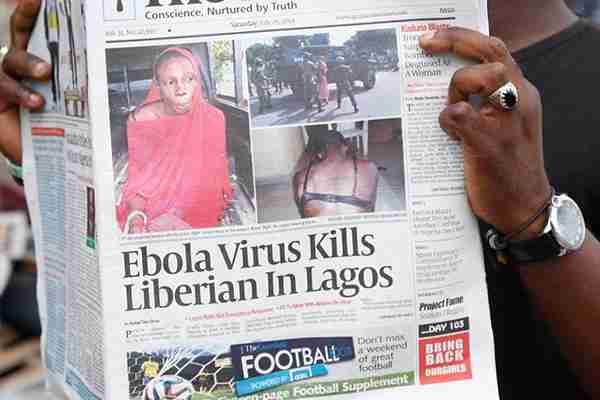 ABUJA, Nigeria – Nigerian health authorities raced to stop the spread of Ebola on Saturday after a man sick with one of the world’s deadliest diseases brought it by plane to Lagos, Africa’s largest city with 21 million people.

The fact that the traveler from Liberia could board an international flight also raised new fears that other passengers could take the disease beyond Africa due to weak inspection of passengers and the fact Ebola’s symptoms are similar to other diseases.

Officials in the country of Togo, where the sick man’s flight had a stopover, also went on high alert after learning that Ebola could possibly have spread to a fifth country.

Screening people as they enter the country may help slow the spread of the disease, but it is no guarantee Ebola won’t travel by airplane, according to Dr. Lance Plyler, who heads Ebola medical efforts in Liberia for aid organization Samaritan’s Purse.

“Unfortunately the initial signs of Ebola imitate other diseases, like malaria or typhoid,” he said.

The aid organization on Saturday said a U.S. doctor working with Ebola patients in Liberia had tested positive for the deadly virus. A Samaritan’s Purse news release said Dr. Kent Brantly was being treated at a hospital in Monrovia, the capital.

Ebola already had caused some 672 deaths across a wide swath of West Africa before the Nigeria case was announced. It is the deadliest outbreak on record for Ebola, and now it threatens Nigeria, Africa’s most populous nation. An outbreak in Lagos, Africa’s megacity where many live in cramped conditions, could be a major diisaster.

Nigerian newspapers describe the effort as a “scramble” to contain the threat after the Liberian arrived in Lagos and then died Friday.

International airports in Nigeria are screening passengers arriving from foreign countries for symptoms of Ebola, according to Yakubu Dati, the spokesman for Federal Aviation Authority of Nigeria.

Health officials are also working with ports and land borders, he said. “They are giving out information in terms of enlightenment, what to do, what to look out for.”

And Nigerian airports are setting up holding rooms to ready in case another potential Ebola victim lands in Nigeria.

Airports in Guinea, Liberia and Sierra Leone, the three other West African countries affected by the current Ebola outbreak, have implemented some preventive measures, according to officials in those countries. But none of the safeguards are foolproof, say health experts.

Doctors say health screens could be effective, but Ebola has a variable incubation period of between two and 21 days and cannot be diagnosed on the spot.

Patrick Sawyer, a consultant for the Liberian Ministry of Finance arrived in Nigeria on Tuesday and was immediately detained by health authorities suspecting he might have Ebola, Plyler said.

On his way to Lagos, Sawyer’s plane also stopped in Lome, Togo, according to the World Health Organization.

Sawyer reportedly did not show Ebola symptoms when he boarded the plane, Plyler said, but by the time he arrived in Nigeria he was vomiting and had diarrhea. There has not been another recently recorded case of Ebola spreading through air travel, he added.

Nearly 50 other passengers on the flight are being monitored for signs of Ebola but are not being kept in isolation, said an employee at Nigeria’s Ministry of Health, who insisted on anonymity because he was not authorized to speak to the press.

Sawyer’s sister also died of Ebola in Liberia, according to Liberian officials, but he claimed to have had no contact with her. Ebola is highly contagious and kills more than 70 percent of people infected.

Ebola is passed by touching bodily fluids of patients even after they die, he said. Traditional burials that include rubbing the bodies of the dead contribute to the spread of the disease, Krishnan added.

There is no “magic bullet” cure for Ebola, but early detection and treatment of fluids and nutrition can be effective, said Plyler in Liberia. Quickly isolating patients who show symptoms is also crucial in slowing the spread of the disease.

West African hospital systems have weak and “often paralyzed” health care systems, he added, and are not usually equipped to handle Ebola outbreaks. International aid organizations like his and Doctors Without Borders have stepped in, but they also lack enough funding and manpower. “We need more humanitarian workers,” he said. “We need resources.”

Next post PADS GO ON AND DOLPHINS OL CONTINUES TO STRUGGLE