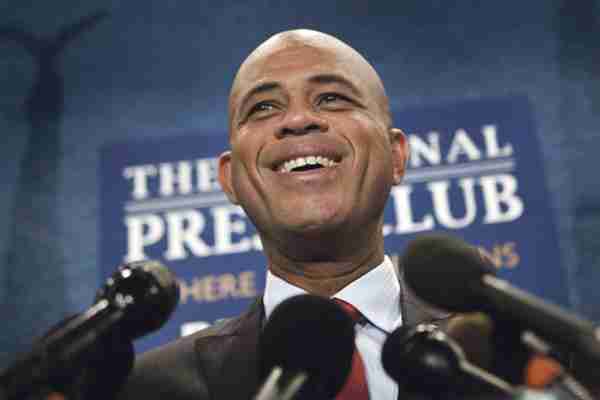 PORT-AU-PRINCE — The broad avenues in the government’s promotional material are clean and unbroken, dotted with palm trees, parks and manicured expanses of grass. The new ministry buildings are sleek and modern but retain some of the neo-classical architecture of the former structures lost to natural disaster.

This is the grand, dream-like vision of central Port-au-Prince that President Michel Martelly says will replace what was toppled when a 7.0-magnitude earthquake left much of Haiti’s capital in ruins on Jan. 12, 2010.

Sketched plans look more like a wealthy Miami suburb than the gritty downtown of old that housed both state institutions and shabby tenements.

“These plans will take a long time to finish, perhaps another 10 years but I think it’s realistic. We can do it,” said Harry Adam, executive director of the government agency that is responsible for the construction of public buildings and housing. Demolition began in June for construction of an “administrative city” covering 75 acres downtown. 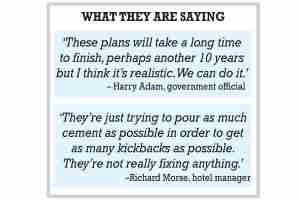 While there are no available figures on the number of people left homeless by the demolitions, the city center has become dotted with new encampments of tarp shacks in recent weeks. Hills of rubble left by bulldozers have grown so large it almost looks like a fresh earthquake just hit.

Bitter quake survivors, some of whom only recently were moved by aid groups from squalid tent camps to downtown apartments, are back to living beneath tarps or staying with friends.

One of them is Jean-Louis Wilner, 32, father of a two-year-old boy. After a couple of years living in a tent camp, he thought he had finally made it. He had a subsidized rental apartment for a year and a small business selling cold drinks. Now Wilner wonders if he’ll make it through the hurricane season. Like others, he claims his possessions were either lost beneath rubble or stolen by thieves when he rushed the items out into the street.

“They only give them a warning of a few minutes and then they start bulldozing? I consider that a crime. These families have nowhere to go and are now homeless again,” said Sen. Moise Jean-Charles, a staunch Martelly opponent.

Public notary Jean-Henry Ceant, who is helping people with their claims, said owners of buildings with proof of their investments are being quickly compensated. But that’s a tall order in a country where the land registry is in shambles and it’s not always clear who owns what.

Renters are also being compensated but only the few who can prove they lived in their now-demolished homes for about a decade and paid their utility bills, the head of the agency overseeing the project said.

“If you can bring proof with receipts that you paid the electricity, you paid the water – if you bring that and you have them for, like, 15, 10 years – then we’ll consider that we’re going to pay you,” Adam said.

For now, it’s hard to see the promised shiny, orderly city center rising amid the cracked streets where steel reinforcing bars twist out of the rubble and are a prized commodity for scavengers. The hope is to consolidate all the government ministries on elegant boulevards and revive a business district that was already dying before the quake.

Evidence of the reconstruction is evident in the skeleton frames of a few new ministry buildings. Most of the work has been funded so far through debt relief money and Venezuela’s Petrocaribe fuel program. Authorities declined to provide a total estimate but the first phase of construction is expected to cost $150 million.

Richard Morse, manager of the storied Hotel Oloffson, which Graham Greene immortalized in his novel The Comedians, asserts the government’s vision of a new capital city is dishonest. The hotelier is a first cousin to Martelly and worked as his special envoy to Washington before quitting early last year over what he says is “outright corruption” in the government.

“We have to rebuild better but it will cost a lot,” he said.