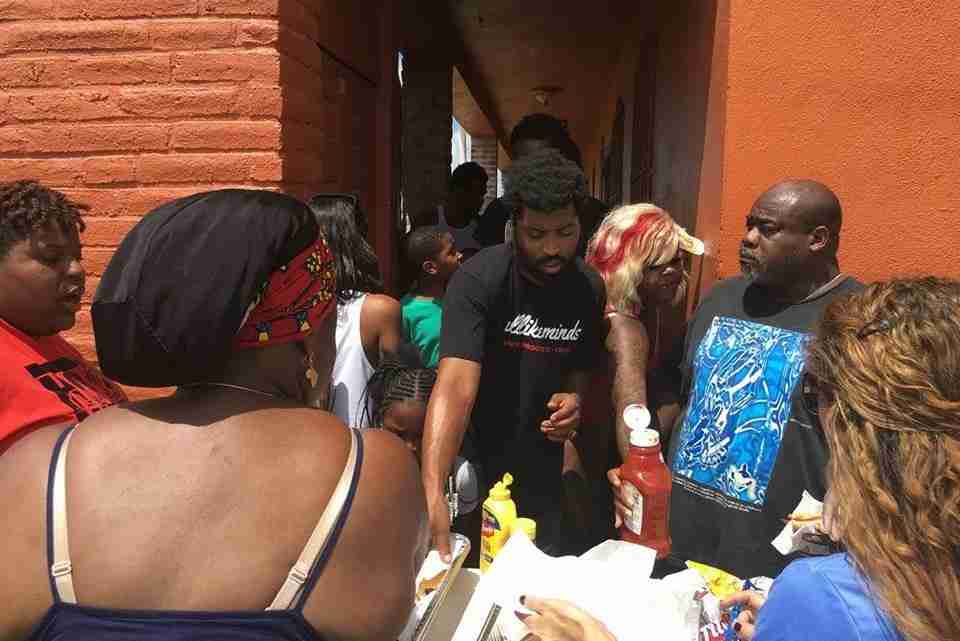 Hundreds of thousands still without power as conditions worsen

MIAMI – Hurricane Irma devastated the entire state of Florida after making landfall in the Florida Keys last Saturday. The slow-moving storm left behind widespread damage, flattened homes and historic flooding in different pockets of the state.

Although Miami suffered minimal structural and flood damage, many members of the community have been left with no power since the storm hit.

“Because we aren’t underwater and houses aren’t down, people think we don’t need help but that can’t be further from the truth,” said Valencia Gunder, founder of Make the Homeless Smile and leader of the Community Emergency Operations Center. “People don’t understand that not having power and people not having resources has created awful and in most cases life threatening conditions.”

Gunder, along with several other community activists and organization heads have created the Community Emergency Operations Center to meet the needs of community members living in the inner city.

“Going into the storm, I started getting a lot of phone calls from people who felt like they were not prepared for the storm,” said Gunder. “I knew something had to be done because in most cases people in my community are often overlooked.” 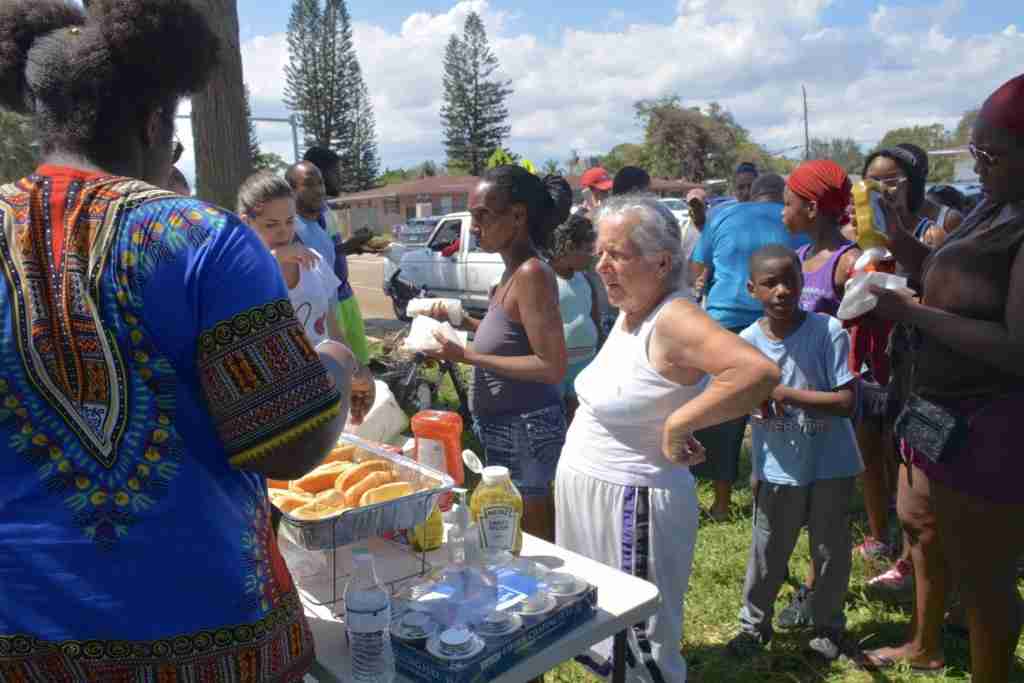 Gunder sees a lot of help pouring into the state from national organizations like the Red Cross, but not much of that help is reaching urban communities like Overtown, Little Haiti and Opa-Locka, who have been without power for the last seven days.

“I’ve been doing climate justice work for three years and climate is a threat multiplier,” said Gunder. “If you were already barely making it before and a storm comes along and takes everything you have, it can be hard to restore your life after.”

Since Monday volunteers have been pouring into the centers headquarters at EcoTech Visions to offer help where needed. Volunteers have been going door-to-door to check on residents offering food, water, ice and reporting emergency situations. Fellow center organizer James Mungin says this is not the time to point the blame, but for everyone to come together and help where they can.

“It’s been hard seeing kids who haven’t eaten in 3-4 days and seniors so weak from the heat that they can barely move,” said Mungin who is a BMe Community Genius and founder of All Like Minds, Inc. “You have to ask yourself if you have access to power, food, water, ice, a generator … how can I use what I have to help my neighbors who are less fortunate than me?”

James has used his network to call on elected officials to help in communities that are not seeing a swift enough response from Florida Power and Light to restore power.

“It is critical that we come and serve the people warm meals and provide ice until power is restored,” said City of Opa-Locka Commissioner Matthew Pigatt. “We could have been a heck of a lot more prepared for immediate service directly following the storm but everything can’t fall upon the government; we need more community orgs pulling together.” 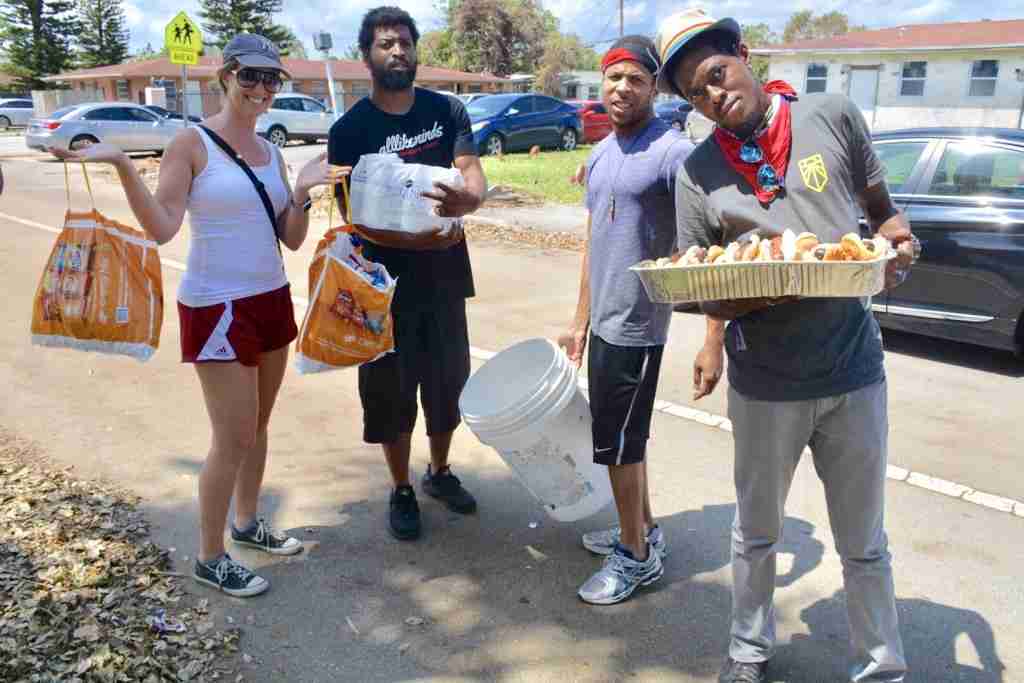 “The mainstream organizations are absent from our communities because they cater to the mainstream, which does not include our communities most vulnerable in the hood,” said Gallon. “It baffles me that nobody contemplated that … if 60%-70% of our kids will only have a healthy nourishing meal during breakfast and lunch when they’re in school that nobody anticipated that that would get exacerbated when these kids are not in school as we approach another week [without electricity].

On Tuesday Gallon sent a memo to Superintendent Alberto Carvalho asking whether the district plans to feed students who are out of school.

“This is something we should have anticipated and because we didn’t, we need to mobilize and get this done,” said Gallon.

Opa-Locka resident Brenda Howard, like many residents, said she was not prepared to go this long without electricity.

“I’m on a fixed income and have been surviving on a bunch of canned goods,” said Howard who is 60-years old and bound to a wheel-chair. “My neighbors check on me and I’m grateful, but I am more excited about these young people who brought me a hot meal.”

Howard is one of hundreds of thousands who is still without electricity.

“People in my community can’t find food and don’t have power,” said Gunder. “Grocery stores are not open and if they are the shelves are bare in addition to people not being able to use their Food Assistance cards because stores are only accepting cash.” 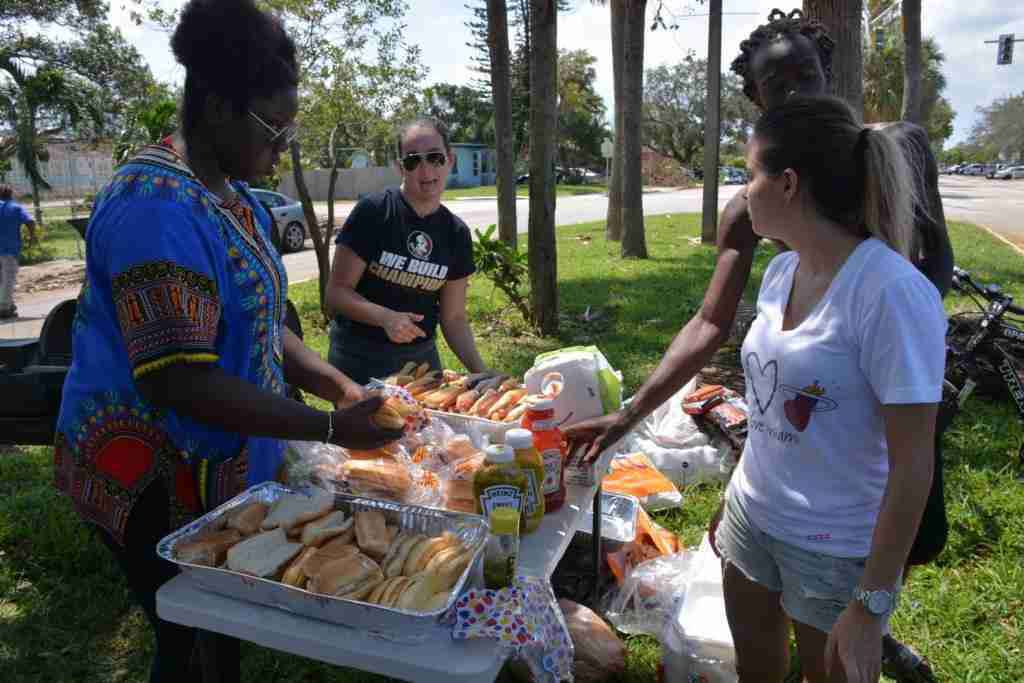 Gunder said we need to address the equity gaps in our inner cities.

“We need to focus on equity going forward and not equality. These communities were already food deserts,” said Gunder. “Some of these people face another disaster after power is restored because they’ve been out of their hourly jobs for so long paychecks will be less … the rent man and light man don’t care about that.”

Community advocates have petitioned civic leaders to do something about the lack of resources and attention in communities.

“We had a 40-Unit building full of seniors who had no resources … we’ve reached out to work with everyone, but realize we have to take care of ourselves,” said Mungin. “We are doing the best with what we got; we are all we got.”

Although Miami-Dade County didn’t initially plan to distribute food, Mayor Carlos Gimenez said Wednesday that they will offer food and ice to seniors and families impacted by Hurricane Irma.

If you would like to volunteer or donate to the Community Operations Center, visit Make The Homeless Smile or stop by EcoTech Visions 670 NW 112 Street in Miami from 7 a.m. to 7 p.m.