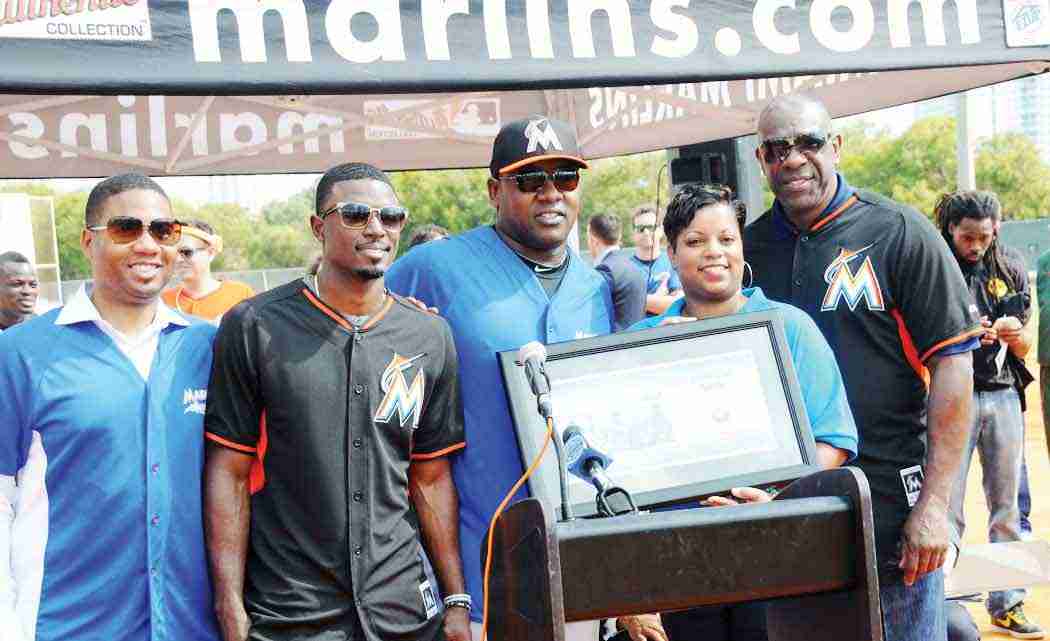 MIAMI — Dorsey Park, which once hosted games by Negro League baseball players in their heyday, recently paid homage to that colorful era when civic and city leaders teamed for a presentation that combined the sport and art.

On Tuesday, Feb. 17, URGENT Inc., the Miami Marlins Ayudan and City of Miami Parks and Recreation hosted more than 100 guests at the Murals for Historic Dorsey Park dedication ceremony held in Overtown.

After the National Anthem and remarks by officials, attendees were treated to an exhibition game played by players from Optimist Rattlers, coached by Justo Jay, and joined by the Miami Marlins Ayudan, Andre Dawson, John Jay and Marlins player Dee Gordon.

The dedication ceremony marked the completion of over 6,000 square feet of murals celebrating the Negro League in Dorsey Park, which was once the South Florida home of games played by the Negro Baseball League teams.

URGENT, a community-based organization headquartered in Overtown, initiated the project in fall of 2012 with seed funding from the Ethel and W. George Kennedy Family Foundation. In 2013, URGENT’s mural project was awarded funds as a Knight Foundation Arts Challenge winner and became a recipient of the very
competitive National Endowment for the Arts Challenge America Fast-Track grant in 2014.

Emily Gunter, URGENT’s director of building literacy through arts and culture, spearheaded the project, and was delighted with the results.

“I am joyous that this project helped bring together the children, youth, families, the artists community and volunteers from throughout Miami-Dade to celebrate historic Overtown and the contributions Negro Baseball League made to the
culturally rich stories of Miami,” Gunter said.

Local artist Alex Douyon served as lead mentoring artist and guided youth apprentices to work on the mural during the summer months as part of URGENT’s summer training and employment program funded by the South East Overtown Community Redevelopment Agency.