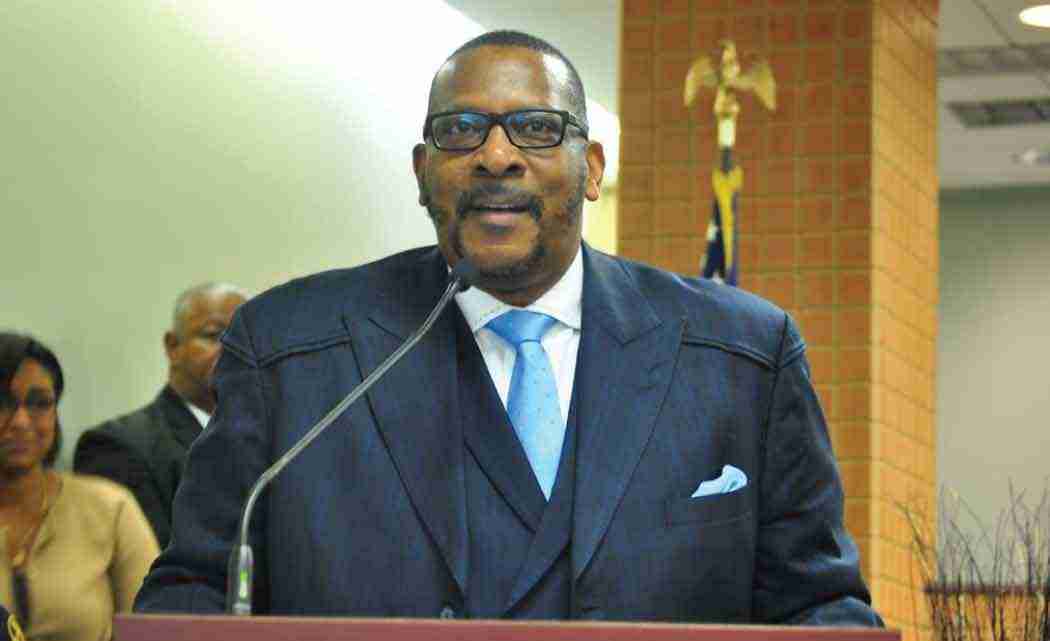 In a standing room only city council chambers with virtually every seat filled by a member of his church, Bishop Victor T. Curry was inducted into the North Miami Hall of Fame on Thursday morning. Curry’s stewardship as the founder and senior pastor of the New Birth International Cathedral of Faith, his former multi-term leadership of the Miami – Dade chapter of the N.A.A.C.P and his outspoken advocacy for communities of color resulted in the municipality, with a sizeable Haitian population, bestowing its highest distinction upon him.

“I’m here to support my pastor because he’s well deserving of this honor. He has such a giving heart,” Rubye Howard, director of the church’s trustee ministry, told the South Florida Times before the ceremony began.

North Miami Mayor Smith Joseph served as the event’s host and kept the already jovial audience laughing throughout the program with his unpredictable humor.

“I’m here to tell you that Smith Joseph loves you,” he said to an unsuspecting Curry, “but I love my wife more.”

The mayor invited members of the city council from North Miami’s various districts to join him at the podium before jokingly declaring, “I don’t have a district, which means I’m homeless.”

Then he got serious.

“This is a very important moment where we pay tribute to a man who lives and breathes the work of God in our community. How can we as a community pay an appropriate tribute to Victor Tyrone Curry and the work that he has done and continues to do? This tribute comes from my heart,” Joseph shared.

Curry’s induction into the Hall of Fame includes a proclamation that will be displayed on a wall outside the council chambers with previous honorees. The guest of honor said the city’s gesture caught him off guard.

“To God be the glory, it’s not often that I’m speechless,” said Curry, who is also the president/general manager of WMBM radio station and the host of its popular “Tuesday Talk” show.

In statements to the South Florida Times following the ceremony, Curry’s generosity of his “time, treasure and talent” was a constant theme with several New Birth members.

Jeffery Brown has been a church elder for seven years, but a member “since day one,” said, “(Curry) has a heart, not just for the people and the church, but for the community too. He’s a big hearted man. If his heart could come out on the table, it would be larger than life.”

Michael V. Hepburn and his wife, Deanne serve in the roles of deacon and deaconess at New Birth, respectively. He said that Curry deserves the recognition “because he’s a hard working brother…who bends over backwards for this community.” His wife agreed. “We have such a giving pastor. He’s a giver to everyone. He loves people,” Deanne Hepburn added.

He’s not only a generous man, but apparently also a busy one.

Aside from the seemingly unlimited number of community roles he performs, including being a member of the Omega Psi Phi fraternity and a member of Florida Memorial University’s board of trustees, Curry is also the pastor of St. Ruth Missionary Baptist Church in Dania Beach; frequently preaching there and at New Birth in the same day.

Named by Miami Business Magazine as one of the 100 most powerful people in Miami, Curry’s empire includes the New Birth Broadcasting Corporation and Gospel Radio Station, AM 1490 WMBM, the Vision to Victory Human Services Corporation, The Dr. E.V. Hill Bible College at New Birth, New Birth Enterprise (which features a state of the art recording studio), the New Birth Employment Ministry, a banquet hall and office space rental. The father of three daughters is also the author of three books.

When he did find the words that had previously eluded him, Curry thanked the mayor, city council and others, but saved his most heartfelt gratitude for the members of his church, whom he called instrumental in him fulfilling his many callings.

“I thank God for New Birth, for not only allowing me to serve them, but allowing me to be all that God has called me to be. They never boxed me in; never said all they wanted me to do is just preaching.”

One of the few talents that he apparently does not possess is singing, as his promise not to do so drew laughter from the audience. Curry did, however, recite lyrics to a Mahalia Jackson song that he said sums up his mission.

Previous post Selma, the linchpin of equal justice in America