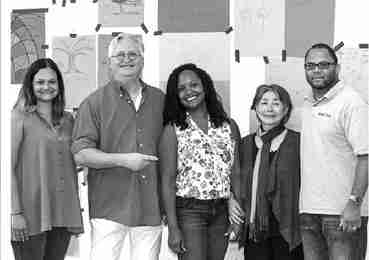 WEST PALM BEACH, Fla. – The City of West Palm Beach CRA was recently named a finalist in the 2017 Knight Arts Challenge Miami by the Knight Foundation.

The agency was selected for its proposed art project in the City’s Historic Northwest District with world-renowned artist Lily Yeh.

The CRA plans to create a cultural hub in the community by having residents and community artists work with Yeh to create a block-long park across from the Sunset Lounge.

Yeh visited West Palm Beach on Aug. 12 for a ‘Design Your Park’ workshop with the CRA, community members, local artists and architects to discuss ideas for the park.

The park is part of the CRA’s Historic Northwest Rising redevelopment project that will ultimately create an African American cultural tourism destination around the Sunset Lounge paying homage to the rich jazz and African American history of the area.

Lily Yeh is an artist whose work has taken her to communities throughout the world. As founder and executive director of The Village of Arts and Humanities in North Philadelphia from 1968 to 2004, she helped create a national model in creative placemaking and community building through the arts.

In addition to the United States, she has carried out projects in several other countries. She is the subject of the feature-length documentary film “The Barefoot Artist.” Yeh is the recipient of numerous awards and has been included in the Asian American Arts Centre’s ‘artasiamerica’ digital archive.

Next post Entrepreneurial center kicks off back to work program