Man who drove into Charlottesville crowd convicted of first-degree murder 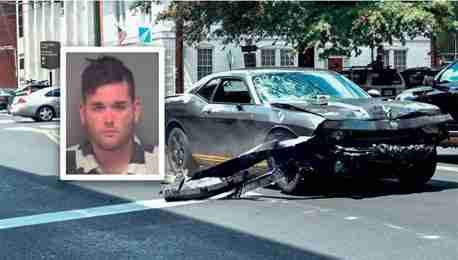 CHARLOTTESVILLE, Va. (AP) – A man who drove his car into counterprotesters at a 2017 white nationalist rally in Virginia was convicted Friday of first-degree murder, a verdict that local civil rights activists hope will help heal a community still scarred by the violence and the racial tensions it inflamed nationwide.

A state jury rejected defense arguments that James Alex Fields Jr. acted in self-defense during a “Unite the Right” rally in Charlottesville on Aug. 12, 2017. Jurors also convicted Fields of eight other charges, including aggravated malicious wounding and hit and run.

Fields, 21, drove to Virginia from his home in Maumee, Ohio, to support the white nationalists. As a large group of counterprotesters marched through Charlottesville singing and laughing, he stopped his car, backed up, then sped into the crowd, according to testimony from witnesses and video surveillance shown to jurors.

Prosecutors told the jury that Fields was angry after witnessing violent clashes between the two sides earlier in the day. The violence prompted police to shut down the rally before it even officially began.

Heather Heyer, a 32-year old paralegal and civil rights activist, was killed, and nearly three dozen others were injured. The trial featured emotional testimony from survivors who described devastating injuries and long, complicated recoveries.
After the verdict was read in court, some of those who were injured embraced Heyer’s mother, Susan Bro. She left the courthouse without commenting.

Fields’ mother, Samantha Bloom, who is disabled, left the courthouse in a wheelchair without commenting.

A group of about a dozen local civil rights activists stood in front of the courthouse after the verdict with their right arms raised in the air.

Charlottesville City Councilor Wes Bellamy said he hopes the verdict “allows our community to take another step toward healing and moving forward.”

Charlottesville civil rights activist Tanesha Hudson said she sees the guilty verdict as the city’s way of saying, “We will not tolerate this in our city.” “We don’t stand for this type of hate. We just don’t,” she said.

White nationalist Richard Spencer, who had been scheduled to speak at the Unite the Right rally, described the verdict as a “miscarriage of justice.” “I am sadly not shocked, but I am appalled by this,” he told The Associated Press. “He was treated as a terrorist from the get-go.” Spencer had questioned whether Fields could get a fair trial since the case was “so emotional.”

“There does not seem to be any reasonable evidence put forward that he engaged in murderous intent,” Spencer said.

Spencer popularized the term “alt-right” to describe a fringe movement loosely mixing white nationalism, anti-Semitism and other far-right extremist views. He said he doesn’t feel any personal responsibility for the violence that erupted in Charlottesville.

The far-right rally in August 2017 had been organized in part to protest the planned removal of a statue of Confederate Gen. Robert E. Lee. Hundreds of Ku Klux Klan members, neo-Nazis and other white nationalists _ emboldened by the election of President Donald Trump _ streamed into the college town for one of the largest gatherings of white supremacists in a decade. Some dressed in battle gear.

Afterward, Trump inflamed tensions even further when he said “both sides” were to blame, a comment some saw as a refusal to condemn racism.

According to one of his former teachers, Fields was known in high school for being fascinated with Nazism and idolizing Adolf Hitler. Jurors were shown a text message he sent to his mother days before the rally that included an image of the notorious German dictator. When his mother pleaded with him to be careful, he replied: “we’re not the one (sic) who need to be careful.”

During one of two recorded phone calls Fields made to his mother from jail in the months after he was arrested, he told her he had been mobbed “by a violent group of terrorists” at the rally. In another, Fields referred to the mother of the woman who was killed as a “communist” and “one of Obama was in the White House.

Since the start of the 2018 cycle, the DNC has reported $126.3 million in individual contributions. That’s more than the $95.9 million collected during the 2016 presidential cycle — when Hillary Clinton’s presidential campaign was the driving financial force on the left — but less than the $155.5 million the DNC raised for the 2014 midterms.

As of the end of November, Perez had whittled party debt down to less than $3 million, with a cash balance of $10.4 million, essentially the same as when he was elected chairman.

Perhaps a more jarring comparison: The RNC collected $226.1 million from individuals during the 2018 cycle. The debt-free GOP boasted a $27 million balance.

To some degree, the DNC shortfalls are a function of how the two parties have evolved. Republicans centralize more of their efforts at party headquarters, while Democrats are more splintered. Democrats’ House campaign committee, for example, far outraised its GOP counterpart during the midterm campaign, and individual Democratic campaigns for House and Senate consistently outraised Republican incumbents and challengers.

Perez also notes the DNC’s investments in every state party, along with targeted spending on field staff that helped score upsets such as Alabama Sen. Doug Jones’ 2017 special election win. But the fundraising lag still limits the DNC’s overall footprint.