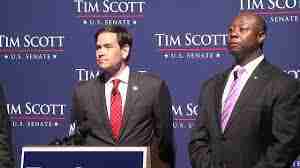 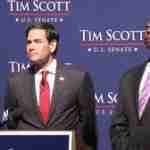 Republican Sen. Tim Scott disclosed the Florida senator’s trip before an audience of about 1,000 people attending the town hall meeting he hosted at the North Charleston Coliseum and Performing Arts Center. Scott has invited all 17 GOP candidates to South Carolina for town hall sessions.

Rubio praised the “extraordinary forgiveness” shown by some relatives of the slain at the first court appearance of Dylann Roof, who is accused in the shootings at Charleston’s Emanuel African Methodist Episcopal Church. Rubio did not talk in detail about his private visit to the church.

South Carolina is an early primary state and has attracted a steady procession of Republican and presidential candidates, with billionaire businessman Donald Trump leading in recent polls.

Rubio has made frequent visits to South Carolina, where early polls show him in the middle of the pack of 17 presidential hopefuls. The primary is still five months away.

At the town hall meeting, Rubio appearing relaxed and jovial and was applauded loudly at times. He drew laughs with some quips about himself, while fielding a wide range of questions from the largely GOP audience.

“A welder makes a lot more than a Greek philosopher,” he said.

He got a loud round of applause when he said next year’s South Carolina primary “signals the end of the Obama era.”

And the crowd gave him a standing ovation when he bashed the Iran nuclear deal and promised to re-impose sanctions against Iran on “my first day in office.”

He also called Russian President Vladimir Putin “a gangster, and I don’t mean that affectionately.”

On the topic of the country’s finances, he said the country’s growing $18 trillion debt is caused by how Social Security and Medicare are structured, saying future generations may need to retire later in life.

“Anyone who is in favor of doing nothing is in favor of bankrupting these programs,” he said. But he noted he would not change the entitlement programs for those 55 and older, a group that includes his mother in Florida.

“I’m against anything that’s bad for my mother,” he said.

Also attending the town hall was U.S. Rep. Mark Sanford, the former South Carolina governor. He said he is not endorsing anyone at this time, but was impressed with Rubio.

“He’s an incredibly skillful communicator,” Sanford said. “He has a quick wit that endeared himself to this audience. And he’s got an awfully compelling life story.”