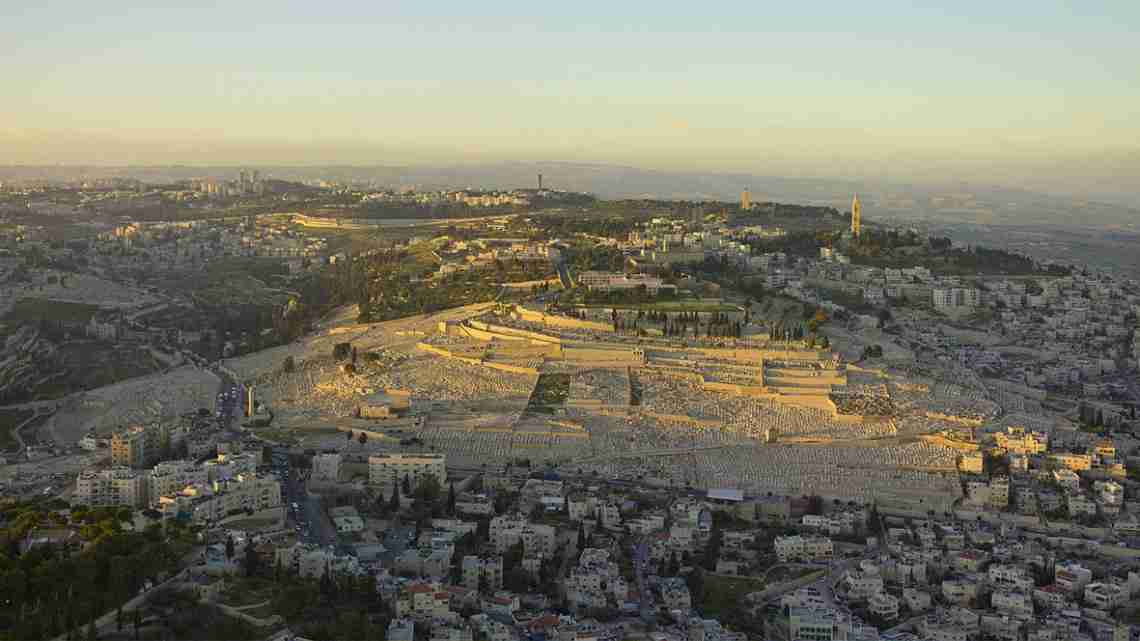 Aerial photograph of the Mount of Olives in Jerusalem.

WASHINGTON – A new LifeWay Research study, sponsored by Chosen People Ministries and New York Times bestselling author Joel C. Rosenberg, released Monday reveals that the overall support of Evangelicals for Israel will drop significantly in the next decade if the younger generation is not educated now about its biblical importance.

The survey, “Evangelical Attitudes Toward Israel and the Peace Process,” for which results were unveiled during a press conference at the National Press Club in Washington, found that although more than 3 in 4 Evangelicals (76 percent) say Christians should support Israel, 4 in 10 younger Evangelicals (41 percent) have no strong views about Israel.

Additionally, fewer younger Evangelicals (58 percent) have an overall positive perception of Israel than older Evangelicals (76 percent), and they are less sure Israel’s rebirth in 1948 was a good thing for the Palestinians.

“In spite of growing opposition to Israel resulting from the growth of various antiIsrael movements active in the United States, it is encouraging that the survey confirms most Evangelicals continue to support the nation of Israel,” said Dr. Mitch Glaser, president of Chosen People Ministries and one of the sponsors of the poll.

“Still, I am concerned for the obvious decline in support for Israel among Millennial followers of Jesus, who either do not know what they believe or do not seem to care.”

As the debate continues regarding a twostate vs. one-state solution for Israel and Palestine, the survey shows Evangelicals are uncertain of the answer. Forty-six percent of respondents are not sure that the State of Israel should sign a peace treaty that allows Palestinians to create their own sovereign state.

This viewpoint is even more prevalent among Millennials, ages 18-34, of which 66 percent are more likely to agree that Christians should do more to care for the Palestinians than older generations, including individuals aged 50-64 (57 percent) and 65+ (54 percent).

“I think Millennials are sending the Church a sobering message,” said author Joel C. Rosenberg, a dual U.S.-Israeli citizen and another sponsor of the survey.

“Right now, they’re not against Israel. But the survey makes it clear that many of them really don’t understand Israel’s place in the biblical narrative, and thus their support for Israel is nearly 20 points less than their parents and grandparents.

“Extrapolate that going forward,” Rosenberg added. “Unless the Church gives younger believers a healthy, balanced, solidly biblical understanding of God’s love and plan for Israel, overall Evangelical support for the Jewish State could very well plummet over the next decade as Millennials represent an ever-larger percentage of the overall Church body.”

In order to help bridge the gap of understanding among Evangelicals, key faith leaders, scholars, authors and pastors announced the formation of the Alliance for the Peace of Jerusalem, an organization dedicated to facilitating a better public understanding of the complexities of the Middle East including its roots in history and the Bible.

The group will strive to educate Millennials and others about Israel’s role in the biblical narrative; past, present and future while also affirming God’s concern for Palestinians and all people’s of the Middle East.

“If we ask why Millennials are less certain about Israel, it may be because most Middle Eastern events in their lifetime have not involved Israel as much as other areas of the Middle East, so Israel is a missing puzzle piece for them,” said Darrell L. Bock, New Testament professor at Dallas Theological Seminary. “The terror attacks on 9/11 changed the Middle East equation, and young people just aren’t sure where Israel is supposed to fit.”

Next post ‘Genesis: Paradise Lost’ back for encore showing

Previous post As moving as it is colorful, ‘Coco’ is a joy for all