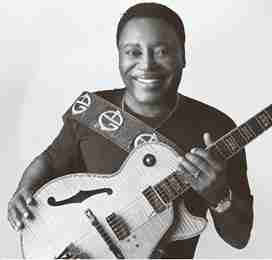 “I remembered a statement that Quincy Jones said to me; that all songs used to be built on what we called a one-bar phrase.”

The next time you see a group of Jehovah’s Witnesses making their way through your neighborhood, opening the door might lead to a very pleasant surprise. Multiple-Grammy-winning jazz guitarist and vocalist, George Benson, has been a member of the religious organization for several decades and still makes house calls.

Benson, who is performing at the Adrienne Arsht Center on Feb. 16 as a part of its Jazz Roots series, spoke to the South Florida Times via a telephone interview.

Responses to his Jehovah’s Witnesses visits range from disbelief: “Has anybody told you, you look like George Benson;” to adoration, “You’re George Benson, aren’t you? I just saw your show last night.”

When a reporter informs him of her fondness for his hit song, “On Broadway,” Benson gives a little history on how he came to record it and why his arrangement differs from the Drifters’ version.

Benson said when a producer approached him about recording the song, he initially declined. “Nobody wants to hear me do that. It’s a classic,” Benson said he told the producer, whose relentlessness led to Benson acquiescing.

“OK, I’ll live with it and see if I can come up with something different,” Benson told the producer. While contemplating an arrangement, he said he recalled a conversation with music legend, Quincy Jones, about the structure of songs.

“I remembered a statement that Quincy Jones said to me; that all songs used to be built on what we called a one-bar phrase.”

Benson hums a few notes to demonstrate what he meant. He said Jones explained that songs at the time, were “two-bar phrases.” The music legend hums a few more notes.

After considering Jones’ explanation, Benson said he decided to change the beats on “On Broadway,” from one beat to include two beats – and the rest, as they say, is history. His decision was not without a fight, however.

“I could not convince my band that that would work. I got mad at one guy, ‘you weren’t even born when that song came out;’ He asked his reluctant band, “Can we try it this way, just for now?”

They did. And all these years later, Benson’s restructured melody of “On Broadway” is one facet of its beauty and staying power; still in rotation on smooth jazz radio stations and music streaming portals across the country. It also won him a 1978 Grammy for Best Male R&B Vocal Performance.

While most of his records are solo performances, Benson has had the pleasure of collaborating with many greats. He said one of his favorites was a live concert Luciano Pavarotti for 30,000 fans in the opera legend’s hometown of Modena, Italy.

Benson said he wished he had collaborated with jazz peers Ella Fitzgerald and Wes Montgomery. If he could collaborate with a contemporary artist in the near future, a very popular R&B standout would be his choice.

“That youngster, Usher. He’s very different. His writing is wonderful. His concepts are very good. They’re simple, but there’s some sophistication in the way he approaches them,” he said of his appreciation for the singer’s style.

Benson said he also has deep appreciation for his fans and looks forward to sharing the music with them.

Their love of the music, he shared, “made me love the songs even more. We get a joy out of playing them.”

Plus, he respects what people encounter to attend a concert.

“They go through a lot to come to our shows,” he said, referring to babysitters, traffic, parking costs and the requisite visit to a restaurant or bar prior to the show. “We owe them the best performance we can give them.”

Next post Black church, community not forgotten in Greene County