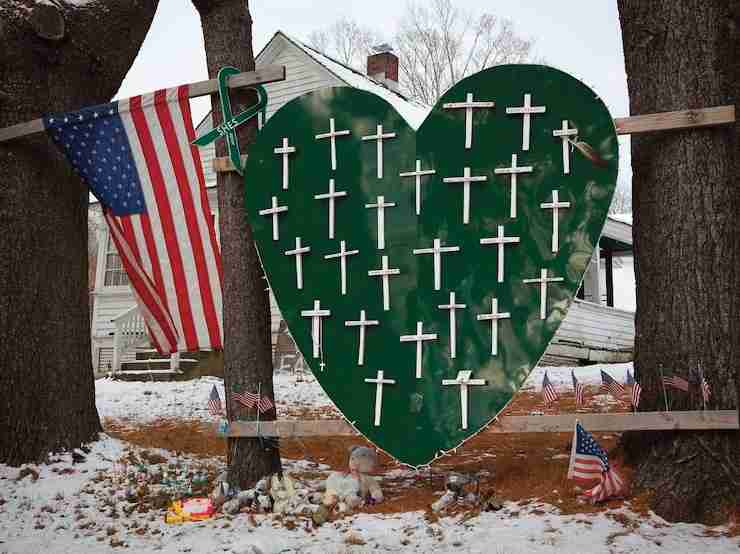 Hartford, Conn. (AP) — The families of nine victims of the Sandy Hook Elementary School shooting announced Tuesday they have agreed to a $73 million settlement of a lawsuit against the maker of the rifle used to kill 20 first graders and six educators in 2012.

The case was watched closely by gun control advocates, gun rights supporters and manufacturers, because of its potential to provide a roadmap for victims of other shootings to sue firearm makers.

The families and a survivor of the shooting sued Remington in 2015, saying the company should have never sold such a dangerous weapon to the public. They said their focus was on preventing future mass shootings by forcing gun companies to be more responsible with their products and how they market them.

At a news conference, some of the parents behind the lawsuit described a bittersweet victory.

“Nothing will bring Dylan back,” said Nicole Hockley, whose 6-yearold son was killed in the shooting. “My hope for this lawsuit,” she said, “is that by facing and finally being penalized for the impact of their work, gun companies along with the insurance and banking industries that enable them will be forced to make their practices safer than they’ve ever been, which will save lives and stop more shootings.”

Gun rights groups said the settlement will have little effect on rifle sales and gun makers, who continue to be shielded from liability in most cases under federal law. But some experts said it may prompt insurers to pressure gun makers into making some changes.

“We might expect to see increased pressure from insurance companies for gun manufacturers to avoid the kind of either design choices or marketing practices that gave rise to this litigation,” said Timothy D. Lytton, a law professor at Georgia State University.

The settlement is not the first between victims and a gun manufacturer. Families of eight victims of the Washington, D.C.-area snipers won a $2.5 million settlement in 2004, with $550,000 coming from Bushmaster Firearms Inc. and the rest from the gun dealer. But Lytton said the impact of the Sandy Hook settlement could be greater because it is so much higher.

The civil court case in Connecticut focused on how the firearm used by the Newtown shooter — a Bushmaster XM15-E2S rifle — was marketed, alleging it targeted younger, at-risk males in advertising and product placement in violent video games. In one of Remington’s ads, it features the rifle against a plain backdrop and the phrase: “Consider Your Man Card Reissued.”

As part of the settlement, Remington also agreed to allow the families to release numerous documents they obtained during the lawsuit including ones showing how it marketed the weapon, the families said. It’s not clear when those documents will be released.

Remington had argued there was no evidence to establish that its marketing had anything to do with the shooting.

The company also had said the lawsuit should have been dismissed because of the federal law that gives broad immunity to the gun industry.

The Connecticut Supreme Court ruled Remington could be sued under state law over how it marketed the rifle, under an exception to the federal law. The gun maker appealed to the U.S. Supreme Court, which declined to hear the case.

Whether similar lawsuits can proceed against gun makers remains unsettled because the U.S. Supreme Court has not yet weighed in on the exception to the 2005 immunity law used by the Sandy Hook families, Lytton said.

Remington, one of the nation’s oldest gun makers founded in 1816, filed for bankruptcy for a second time in 2020 and its assets were later sold off to several companies. The manufacturer was weighed down by lawsuits and retail sales restrictions following the school shooting.

Adam Lanza, the 20-year-old gunman in the Sandy Hook shooting, used the rifle made by Remington and legally owned by his mother to kill the children and educators on Dec. 14, 2012, after having killed his mother at their Newtown home. He then used a handgun to kill himself as police arrived.

Lanza’s severe and deteriorating mental health problems, his preoccupation with violence and access to his mother’s weapons “proved a recipe for mass murder,” according to Connecticut’s child advocate.

Messages seeking comment were left for Remington and its lawyers Tuesday.

The National Shooting Sports Foundation, a Newtown-based group that represents gunmakers, said courts should not have allowed the case to proceed and it believes the plaintiffs would have lost at trial. It also said the settlement should have no effect on the The Protection of Lawful Commerce in Arms Act, the 2005 federal law that shielded gun makers from liability.

“The plaintiffs never produced any evidence that Bushmaster advertising had any bearing or influence over Nancy Lanza’s decision to legally purchase a Bushmaster rifle, nor on the decision of murderer Adam Lanza to steal that rifle, kill his mother in her sleep, and go on to commit the rest of his horrendous crimes,” the group said in a statement.

Four insurers for the now-bankrupt company agreed to pay the full amount of coverage available, totaling $73 million, the plaintiffs said.

“Today is about what is right and what is wrong,” said Francine Wheeler, whose 6-year-old son, Ben, was killed in the shooting. “Our legal system has given us some justice today. But … David and I will never have true justice. True justice would be our 15-year-old healthy and standing next to us right now. But Benny will never be 15. He will be 6 forever because he is gone forever.”

Previous post Education will be essential for Blacks voting in 2022