Know your US Constitution? More states look to teach it 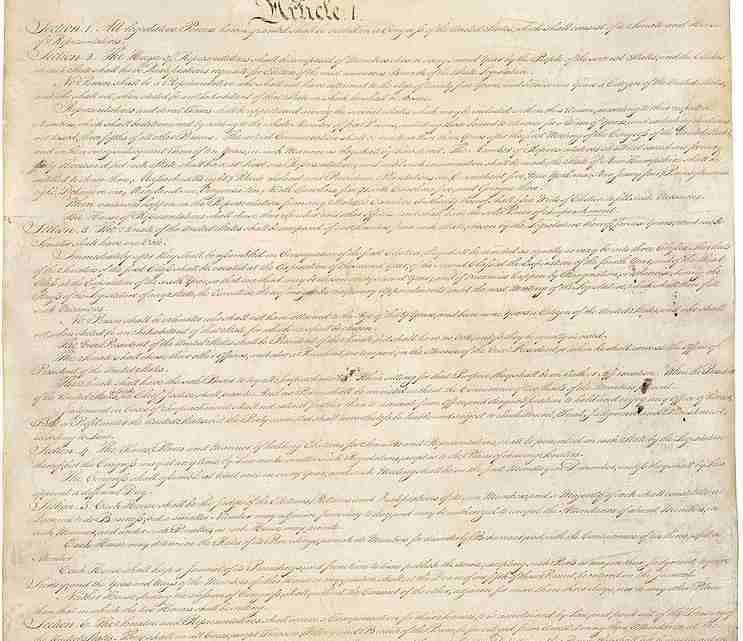 First page of the US Constitution.

NORTH SMITHFIELD, R.I. (AP) – Should U.S. high school students know at least as much about the Declaration of Independence, the Constitution and the Federalist papers as immigrants passing an American citizenship test?

In a growing number of school systems, having such a basic knowledge is now a graduation requirement. But states are taking different approaches to combating what’s seen as a widespread lack of knowledge about how government works.

Kentucky last week and Arkansas on March 16 became the latest of more than a dozen states since 2015 that have required the high school social studies curriculum to include material covered by the 100 questions asked on the naturalization exam. Lawmakers in other states, including Minnesota, are hoping to foster even deeper understanding of the fundamentals of American democracy by adding a full course to study its most important documents.

“Rights might be inherent, but ideas need to be taught,” said Maida Buckley, a retired classroom teacher in Fairbanks, Alaska, who testified last year to an Alaskan legislative task force on civics education. “When you have a system of government that’s based on ideas, espoused in the Declaration of Independence and carried out with a working document in the Constitution, those ideas need to be taught.”

It’s a bipartisan cause, and in many states such bills are jointly introduced by Republicans and Democrats. But proponents’ motivations vary from dismay about the lack of participation in local school boards and town halls to concerns about how Republican President Donald Trump and his supporters view the power of the executive branch.

“We clearly have seen there is a serious civics deficiency in this country, all the way up to the top, the very top,” said Rhode Island Democratic state Rep. Gregg Amore, a longtime high school history teacher who is co-sponsoring legislation that contends the “survival of the republic” depends on Americans understanding its principles and history.

A campaign by the Scottsdale, Arizona-based Joe Foss Institute has led many states to pass laws requiring students to know what’s on the citizenship test.

“It’s not a panacea or silver bullet, but it’s a step forward,” said the group’s Lucian Spataro, who said 17 states have adopted the model or something similar. “You have to learn the basics before you can have the higher-level discussions.”

Other civics education boosters say such a mandate is too simplistic.

“If you do something like that, people are going to start teaching to the test and teaching a game of Trivial Pursuit,” said Charles Quigley, executive director of the Calabasas, California-based Center for Civic Education. “Kids are already tested to death.”

The Rhode Island bill, introduced by a Republican from North Smithfield, a conservative town where Trump is popular, is partly inspired by a ninth-grade class taught at North Smithfield High School. The honors class uses the “We the People” curriculum developed by Quigley’s group. Students participate in a national competition in which they must orally defend their ideas.

On a March afternoon, teenagers stood at their classroom’s lectern one by one, debating whether a California police officer can search a suspected gang member’s smartphone without a warrant.

As they argued, some cited language from the U.S. Constitution’s Fourth Amendment. Others looked to Supreme Court Justice Louis Brandeis’ 1928 dissenting opinion in a wiretapping case.

Their teacher, Natalie O’Brien, gently prodded them to think critically and tap into more than 200 years of American history and legal philosophy. She didn’t tell them that, in 2014, a unanimous Supreme Court ruled in the California case that police may not generally search the cellphones of people they arrest without first getting search warrants.

“Someone’s going to channel James Madison, right?” she asked. “What would Brandeis be saying about this particular decision? What would the founders be saying?”

North Smithfield High student Megan Skinner said she didn’t pay much attention to politics before O’Brien’s class, but the 15-year-old now said she now uses the founding U.S. documents as a guide as family and friends debate the Trump presidency.

“It gives us an entirely new perspective on all the events that are going on,” Skinner said. “You see all these things in the news, and especially about the election, and all the things that are going on with the executive orders he passed, the travel bans. Before this class, we wouldn’t have understood these things.”

Previous post Title or money? The give-and-take of one-and-done in hoops