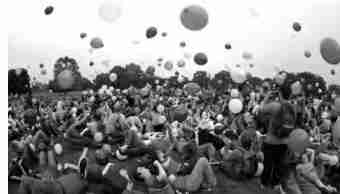 MIAMI BEACH, Fla.—The Mp3 Experiment is coming to Miami Beach for the first time, having already toured dozens of countries and hundreds of cities around the world. The participatory public event was created by Improv Every- where founder Charlie Todd and composer Tyler Walker.

It engages with participants through a pre-recorded set of instructions that encourages interaction, improvisation and endless amounts of fun. Previous Mp3 Experiments have created side-splitting results; with participants singing and dancing in unison, playing the company’s version of “Simon Says” and surprising observers with spur-of-the-moment flash mob action.

David Pogue of the New York Times – who participated in a previous event – had this to say about the Mp3 Experiment: “It was hilarious. The crowd was young and fun, and the whole thing was orchestrated, planned and written exceptionally well. What a totally, totally cool idea: part mass hypnosis, part party, part comedy club… like a political rally, but with more to do…find a way to be part of it.”

Participants will be sent a link in advance to a special Mp3 file to download on their mobile devices. They will be instructed to synchronize their watches to an atomic clock that can be found on Improv Everywhere’s website and will be given a list of everyday items to bring with them to the event. At 6:30pm on Oct. 9, participants will gather on Lincoln Road between Pennsylvania and Meridian Avenues and blend in with the throngs of pedestrians that frequent the busy neighborhood on a daily basis. At the appointed time, all participants will press play on their mobile devices and follow the pre-recorded instructions to create a spontaneous, crowd-sourced flash mob lasting approximately 45 minutes. Improv Every- where is, at its core, about having fun.

“We are big believers in “organized fun.” Our missions are a fun source of entertainment for the participants, those who happen to see us live and those who watch our videos” explains Todd. “We´re out to prove that a prank can simply be about making someone laugh, smile or stop to notice the world around them.”

Florida´s pedestrian road will under- take a unique transformation that will embrace its rich culture and diversity while infusing a more eclectic, bold, fashionable and community-driven focus. The experience will bring together the arts, culture and carefully cu- rated events.

The Mp3 Experiment will take place on Sunday, Oct. 9 at 6:30pm and will start on Lincoln Road between Pennsylvania and Meridian Avenues. Those interested in taking part can download the Lincoln Road Mp3 Expe iment recording and find more information about the event at and lincolnrd.com/mp3- experiment