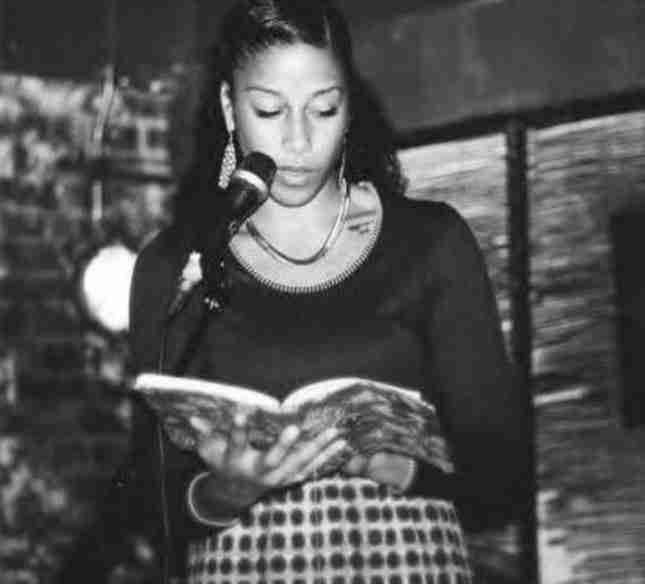 Aja Monet is known for her powerful poetry pieces.

Monet has been described by entertainment icon and activist Harry Belafonte as “the true definition of an artist.” An internationally established poet, singer, performer and educator, her craft is an in-depth reflection of emotional wisdom, skill and activism.

The youngest individual to win the legendary Nuyorican Poet’s Café Grand Slam Title, Monet is recognized for combining her spellbound voice and powerful imagery on stage.

Among Monet’s books are: “My Mother Was a Freedom Fighter,” “Inner-City Chats and Cyborg Cyphers” and “The Black Unicorn Sings.” she also collaborated with poet-musician Saul Williams on the book “Chorus: A Literary Mixtape.”

Her first CD, “Scared to Make Love/Scared Not To,” is a testament to her creative lens and a social commentary on the discussion of love.

Monet is of Cuban-Jamaican heritage and has performed at world-renowned venues including: Town Hall Theater, the Apollo Theater, the UN and the NAACP’s Barack Obama Inaugural Event in Washington, D.C.

In addition to Monet, the PBPF will feature Coleman Barks as the special guest poet. Barks is a major poet who has been touted as the world’s leading expert on 13th century poet Rumi, the founder of Sufism.

Tuition for workshops is $895 and includes five three-hour workshop sessions; admission to all festival events, including a ticket to attend the festival gala and to read at open mics at the Poetry Festival book store. Limited scholarship assistance may be available.

Tuition for Auditors is $495 and includes observation of a workshop and admittance to all festival events except the gala. Auditing is offered for beginning poets who may be shy about sharing their poems, or non-poets, and is a great opportunity to learn by observing and listening.

In addition, Slam Champion Elizabeth Acevedo will host an event and there will be a special tribute to Poet Thomas Lux, a longtime supporter of the festival who died earlier this year.