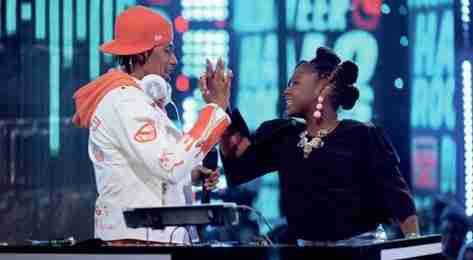 Nick Cannon and South Florida’s Zoe Terry, share a high five after he announces the 11-yearold honoree during the taping of Nickelodeon’s HALO Awards. The show will air Nov. 26 at 7 p.m. on Nickelodeon Networks.

MIAMI – When Zoe Terry first began giving out dolls of color at age five, she wanted to make sure other little girls wouldn’t feel like she did when she was bullied for her skin color and “puffy hair.”

After her mom and teachers helped her understand she was beautiful, Terry wanted to make sure little brown girls like her loved their own image as well, no matter what anyone said.

With this mission in mind, she founded Zoe’s Dolls, an organization that focuses on girl empowerment and anti-bullying through a variety of programs and events that incorporate fitness, self-expression, community spirit and empowerment.

Fast-forward to the present, and the now 11year-old CEO has made history several times over – and she’s nowhere near slowing down.

Terry has chapters of Zoe’s Dolls in South Florida, Mississippi, Texas and Georgia; and donates dolls to schools, churches, shelters and foster homes. She’s also made an international impact by helping girls in Haiti and Africa. She has given out close to 20,000 dolls since starting six years ago.

Now Terry has received another accolade for her work by becoming Nickelodeon’s youngest HALO (Helping And Leading Others) Award winner.

On Sunday, Nov. 26, Terry will celebrate by hosting a free watch party at 6 p.m. at the ARC, located at 675 Ali Baba Avenue in Opalocka.

Terry and her fellow honorees will be shown receiving their awards during a star-studded concert thrown to honor their community work.

The awards will air at 7 p.m. on all of Nickelodeon’s Networks and feature some of the most popular stars to pay tribute to the four young honorees for how they are helping and leading others.

Among them will be Kelly Clarkson, who received the HALO Hall of Fame Award for her work with a wide variety of organizations. The show is the brainchild of Nick Cannon.

Terry said she is grateful for the unexpected honor.“I feel great. I was so surprised. It’s a great accomplishment that I wasn’t even expecting,” Terry said. “It shows what my favorite quote says is true: ‘Nothing is impossible; the word itself says I’m possible.’”