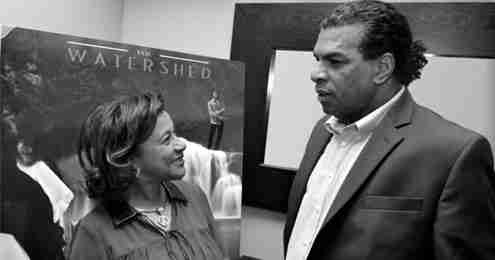 ATLANTA, Ga – Platinum-selling Jamaican recording artist Jack Radics has been hailed as one of Jamaica’s finest cultural ambassadors and a national treasure by Jewel Scott, Honorary Consul of the Jamaican Atlanta Consulate in Georgia.

Scott made the remarks as she issued the keynote address at the launch of Radics’ new album, The Watershed, at the Bassmint Production Studios in Atlanta recently.

Before a standing-room-only crowd filled with celebrities, industry professionals and well wishers, Scott called the launch of The Watershed album, “Another milestone in the artistic journey of one of Jamaica’s finest sons and one of our most distinguished cultural ambassadors.”

She noted that in a career spanning nearly thirty years, Radics had held the flag of his nation high on stages across the world, and refused to bow to commercial pressure to create anything but “music he can be proud of.”

“We are all the richer for the music he has given us – as a producer, songwriter, bandleader and a singer,” Scott said.

The launch also featured the world premiere of the music video for Love Is, the first single from the album. The video was directed by acclaimed film director James Thayer.

Three versions of The Watershed album – main, acoustic and instrumental renditions – were released simultaneously. It was also announced that Radics will soon embark on a major US tour to promote the album.