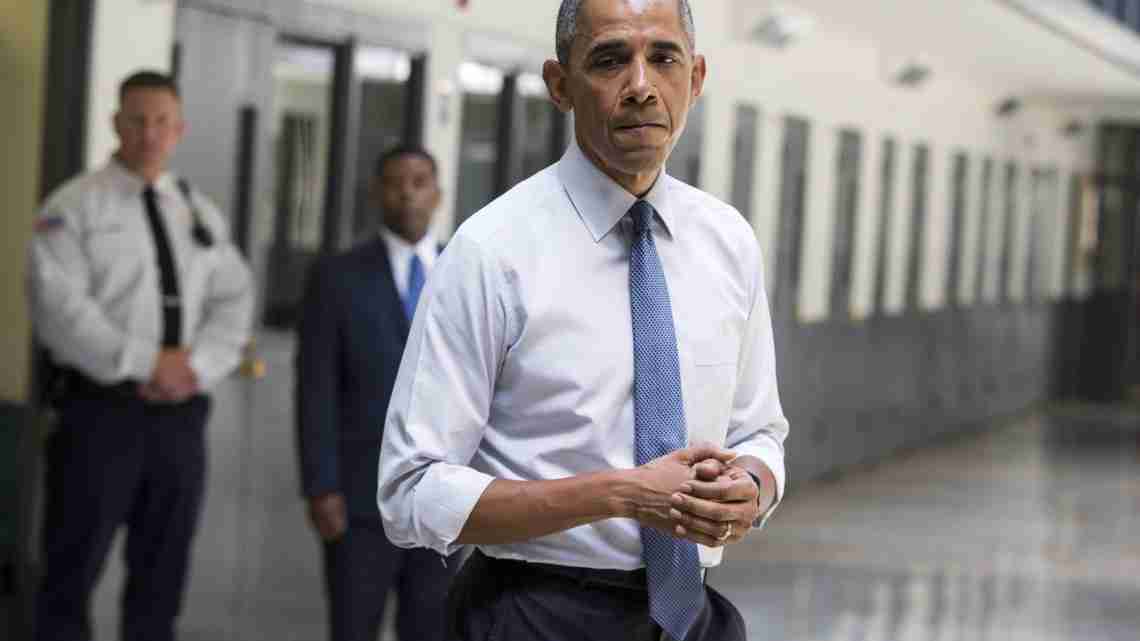 NEWARK, N.J. (AP) – President Barack Obama toured a drug rehab and met with former inmates Monday in the rough-and-tumble city of Newark, calling on the nation to ensure those regaining their freedom get a second chance instead of a return ticket to prison. Although his visit boosted his campaign for a criminal justice overhaul, it also pulled the president into a war of words with presidential candidate and GOP Gov. Chris Christie.

“There are people who have gone through tough times, they’ve made mistakes, but with a little bit of help, they can get on the right path,” Obama said at Rutgers University’s law school. “It’s not too late.”

On a gritty street in downtown Newark, a city beset by violent crime and policing challenges, Obama made an afternoon stop at Integrity House, a state-funded drug and residential treatment center. Obama held up the facility as “a model for the good work that’s being done sporadically around the nation.” He also met privately with former prisoners, a parole officer and a federal judge to hear more about obstacles to rehabilitation.

Aiming to divert some of Obama’s limelight to himself, Christie spent the day in Camden, New Jersey, where he met with community and police leaders and touted the city as a national model for police reform. In 2013, the city disbanded its police force and replaced it with a county-run department. No longer bound by union contracts, the department has emphasized community policing, with more officers and improved community engagement.

Christie, who is struggling to attract attention for his White House bid, told The Associated Press in an interview that Washington can’t claim credit for the decreases in crime and criminal justice reforms he’s pushed as governor.

“I just think he’s had nothing to do with the successes that are here,” Christie said. “I think for the president to come and, you know, try to take a victory lap here is beneath him.”

Christie’s critiques, echoed in morning television appearances, drew a stern rebuke from the White House, which called them “irresponsible.” White House spokesman Josh Earnest speculated that Christie’s comments were aimed at turning around his campaign.

“They’re not surprising for somebody whose poll numbers are close to an asterisk,” Earnest said.

The Democratic president and the brash New Jersey governor have had a mixed history over the years. Christie’s praise for the president’s response to Hurricane Sandy, just days before the 2012 election, was credited with helping Obama secure a second term. But the two have clashed over national security and law enforcement, with Christie accusing Obama of failing to adequately support police.

More than two million people are incarcerated in the U.S., and each year 600,000 or more are released back into society. There they face a dearth of jobs, housing and mental health services that puts many on the short path back to prison in what Obama has plaintively described as a cycle of incarceration.

Obama’s focus on the previously incarcerated comes as more than 4,300 inmates are being released at the start of November, in what will likely be tens of thousands to benefit from drug sentencing changes last year. In rare bipartisan fashion, Congress is considering legislation cutting sentences for nonviolent drug offenders, an effort the White House has elevated as one of Obama’s top priorities for the remaining months of his presidency.

“I urgently encourage both the Senate and the House to pass these bills,” Obama said.

Without new laws, Obama is limited to modest steps he can take on his own. For example, Obama has asked Congress to “ban the box,” shorthand for prohibiting the government and its contractors from asking job applicants about criminal histories on applications. It’s an issue resonating in the Democratic presidential primary, with Hillary Rodham Clinton, Bernie Sanders and Martin O’Malley all supporting steps to help those convicted of crimes find employment.

Obama announced he’s directed the government personnel office to wait until later in the hiring process to ask about criminal histories, a step most federal agencies have already taken, the White House said. The Obama administration will also clarify its “one strike” rule that prevents many people with arrest records from living in public housing.