Former slave-owning nations getting reparations bills for trillions of dollars 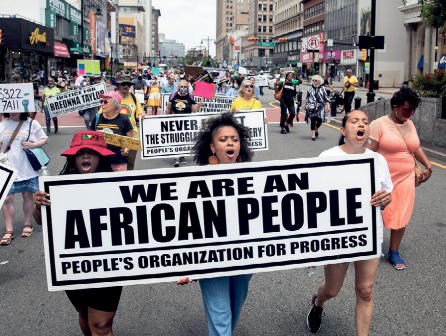 FINAL INSTALLMENT IN A SERIES

The African continent has sent Europe a $777 trillion reparations bill for enslaving 32 million of its people between 1450 and 1850 and theft of its minerals. The demand came during the ﬁrst conference of the African World Reparations and Repatriation Truth Commission, held in Accra, Ghana. The Accra Declaration called for the debt to be paid within ﬁve years and also that African nations’ international debt be "unconditionally cancelled.”

The demand, made 21 years ago, has not been met. However, additional claims for reparations have also been made, including, in some cases, for the atrocities committed under colonialism. The Mau Mau in Kenya won a lawsuit in 2013 against the British government in a case ﬁled by ﬁve elderly persons for torture and forced labor, Quartz Africa’s Lynsey Chutel reported. The court ordered the British government to pay $24.8 million to 5,000 Kenyans; another 40,000 ﬁled a similar lawsuit.

Taking a cue from the Mau Mau case, Tanzania announced plans to sue the German government for genocide, Defense and National Service Minister Hussein Mwinyi told Deutsche Welle. As part of its tactic reserved for “wild people and barbarians,” the German colonial army starved to death up to 300,000 people in Tanganyika, now part of Tanzania, during a rebellion from 1905 to 1907, “destroying fields, homes and livestock even as their guns outmatched the spear-wielding African soldiers on the battlefield,” Chutel noted. “The African population in the region decreased by as much as three-quarters.”

Meanwhile, the 15-nation Caribbean Community (CARICOM) created a Caribbean Reparations Commission in 2013 to press for reparations and apologies from Britain, France and the Netherlands, the Associated Press reported. Distinguished Barbadian historian Hilary Beckles, vice-chancellor of the University of the West Indies (UWI), chairs the commission.

CARICOM hired Leigh Day, a British law firm which won the Mu Mau lawsuit. The Caribbean states have not put a price tag on the reparations they are seeking. But Prime Minister Ralph Gonsalves of Saint Vincent and the Grenadines has pointedly noted that, during emancipation in 1834, Britain paid slaveholders in the Caribbean the equivalent of $276 million in compensation for the loss of their “property” but nothing to the enslaved.

CARICOM has brushed aside that response and has become emboldened by the Black Lives Matter movement. The region’s leaders were “tweaking” their tactics, including allying themselves with African states, Guyanese journalist Bert Wilkinson reported in the New York Amsterdam News in July. A partnership between Grenada and Botswana expanded to more than 60 countries. Portugal and Spain were added to the list. So too were Norway, Russia, Sweden and Switzerland after the commission’s research found that “they also played a significant part and benefitted economically and in other forms from the slave trade to the Americas.”

The reparations drive has also reached an unlikely place. “Although a perception exists of Scotland as a victim of English domination, in fact Scots played a major and highly lucrative role in colonial expansion, the transatlantic slave trade and the Caribbean plantation economy,” Elliot Ross reported in Al Jazeera in November 2018. The British government, under its Slave Compensation Commission, paid Scottish slaveowners for having to free their slaves. The payout “was invested in business, real estate and agricultural improvement, as well as in many Scottish institutions,” Ross reported. “It is now the established consensus among historians that the development of modern Scotland owed much to the slavery economy.”

Scottish involvement in slavery was also the topic of a BBC documentary, “Slavery: Scotland’s Hidden Shame,” and a book, “Recovering Scotland’s Slavery Past,” which probed the topic. Meanwhile, the University of Glasgow launched a “program of reparative justice” after its own study in 2018 revealed that, between the 1780s and 1880s, it received the equivalent of millions of dollars in grants and endowments from Scottish and English slaveowners. The money “served to enrich and physically expand the near 600-year-old university,” the Saint Lucia Star reported.

The University of Glasgow signed an agreement with UWI to fund joint research and promote development initiatives over the next decade through a Glasgow-Caribbean Centre for Development Research. The university will provide $27 million in funding – matching what the British government paid slaveowners at emancipation.

“The Centre will target and promote solutions to Caribbean development problems in areas such as medicine and public health, economics and economic growth, cultural identity and cultural industries, and other 21st century orientations in Caribbean transformation,” the Star reported.

At another level, Bridget Freeman, an accomplished British musician, became so appalled after viewing a documentary on the Atlantic slave trade that she donated $500,000 to UWI’s five-year-old Global Giving campaign for its new Faculty of Culture, Creative and Performing Arts. “It is about reparation,” Freeman said. “We owe it. Once you see the ships of the slave trade, the giving back just seems so obvious.”

So while enough Americans resist coming to terms with the nation’s history of slavery to freeze talk of reparations, there is a growing acceptance elsewhere of the reality that many of today’s powerful nations, institutions, buildings and businesses owe their beginnings to the enslavement of millions of Africans and some have started doing something to atone for it. Many of these initiatives seem to come from the heart, albeit belatedly; they will not halt the coming reckoning over slavery and true reparations.