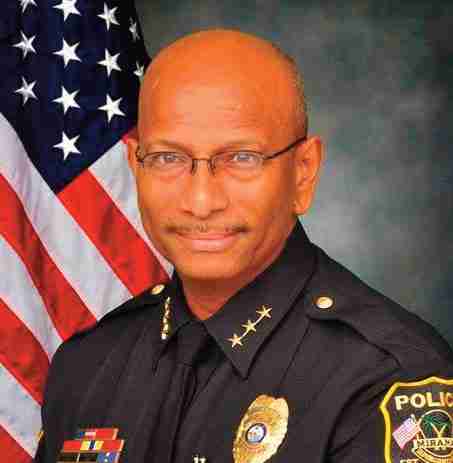 Mirama, Fla. – The City of Miramar didn’t have to look far for a new head of its police department.

The city was searching for Dexter Williams’ replacement following his announced retirement as chief in April of 2021 after serving on the force for 27 years.

Burgess, 60, who also previously served as assistant chief, is in charge of overseeing 220 sworn ofﬁcers who patrol 31 square-mile-Miramar, whose Black and Hispanic populations each constitute 41 percent, with 8 percent Whites.

Burgess’ law enforcement career spans more than 37 years including stints with the Miami-Dade and the North Miami police departments.

Born and raised in South Florida of African American and Panamanian decent, Burgess retired as a division chief for Miami-Dade.

In 2008, he was appointed deputy director of the Miami-Dade Corrections and Rehabilitation Department, and in 2014 became the police chief of North Miami, where his law enforcement career started in 1984.

"I’ve come out of retirement several times, and I tried to stay retired but never could accomplish it," Burgees told the South Florida Times. "I will always have a passion to stay serving the community. I just love what I’m doing."

Burgess said after he retired from North Miami in 2016, he saw an opportunity to work for his hometown of Miramar as assistant chief to serve a diverse city and was named interim police last year.

"I was very honored for multiple reasons," he said on getting the job on a permanent basis. "Honored because I love working here, and I have the opportunity to be at the helm of serving a diverse city. I love working with the elderly population and doing mentorship programs with our management team and go out in the community and work together with the ﬁre department, homeowners’ associations and the schools."

Burgess said the challenge for his police department is ﬁlling vacancies to adequately serve the city’s citizens. Besides 229 sworn ofﬁcers, the department has 81 support staff members. Burgees said the city is competing against other local enforcement agencies to recruit and hire police ofﬁcers.

"The more ofﬁcers on the streets, the better for the residents," he said.

The city saw a 12 percent overall reduction in the crime rate in 2021 including vehicle burglaries (21 percent), residential and business burglaries (38 percent) and robberies (22 percent).

Burgees said he’s a strong advocate of community engagement which helped the city and police lower the crime rate. He said the extra set of eyes from volunteers and proactive residents are key to deter crime and help the police nab suspects.

"The information we get helps us to be responsive and we get great results with the information," he said. "Here, it’s residents taking ownership to make the city safe. It’s a family of residents interacting with community engagement and building relationships and partnerships with the community and the police."

Before the 2018 Marjory Stoneman Douglass High shooting massacre that took the lives of 17 people and injured another 17, Miramar was the ﬁrst city in Broward County to have at least one resource ofﬁcer at 20 public and charter schools.

He also said the city has zero racial and bias compliments within the department and in the community for 2021.

Like his father, Burgess joined the U.S. Marine Corps, and later became a police ofﬁcer. He rose through the ranks, supervising numerous districts, bureaus and task forces for various agencies like his father.

"I’m very proud of serving in the U.S. Marine Corps and following my dad," he said.

In addition to numerous certiﬁcations, Burgess holds a master of Science Degree in Criminal Justice, is a graduate of FBI National Academy and the Senior Management Institute for Police Executives at Harvard’s Kennedy School.

Burgess has earned numerous awards and recognitions. He also is the past president of the National Organization of Black Law Enforcement Executives (NOBLE) and volunteers as a cadre leader with 5000 Role Models of Excellence, mentoring young men in our community.

"Chief Burgess’ 37 years of experience in law enforcement will enable him to address the current and future needs of the department and our community," said Miramar City Manager Whittingham Gordon, who appointed Burgess to the position permanently.

"He is a person of high integrity and character and I know he will serve the residents of Miramar in a professional and efﬁcient manner.”

Burgess is married and has three children and three grandchildren.