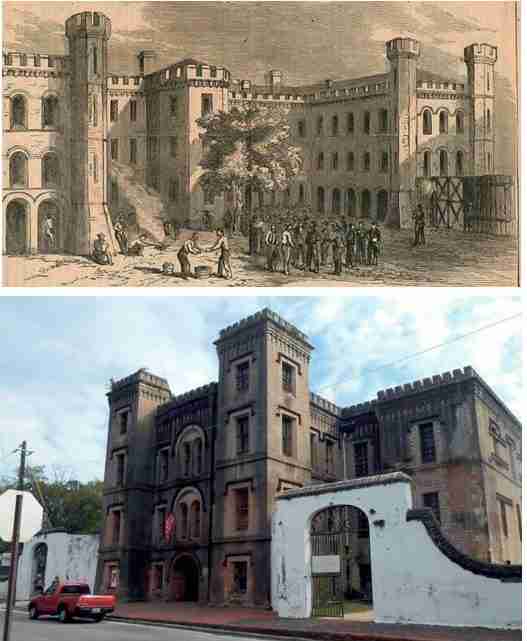 Charleston, S.C. (AP) – Until recently, the story of the Charleston Work House received little recognition in the city’s collective memory. That changed a little when Mayor John Tecklenburg unveiled a plaque detailing its past.

“I don’t know of a more horrific thing than what this city did,” Tecklenburg said through tears at a July 13 ceremony. “It’s shameful.” The Charleston Work House, was located next to The Old Charleston Jail on Magazine street. It was a place where slave owners could pay the city to punish enslaved people.

Until this week, the empty lot has had little markings or signage. But in its time, it was a source of brutal mistreatment of enslaved people as well as a source of revenue for the city of Charleston. The plaque erected July 13 includes research reviewed by the Charleston Commission on History.

The property began as housing for the White paupers in 1738, the plaque reads. But soon it was expanded to add the Work House. For a price, city employees whipped enslaved people up to 40 times per week. For an added cost, they would literally throw salt on the wounds.

Slave owners who ran late on their bills were charged extra and could end up forfeiting their enslaved person to the city. An image of one of these invoices is displayed on the plaque. Charleston could then force that person into labor for the city or sell them and put the profit back into the city’s coffers.

The legacy of the lot has long been obscured. When Tecklenburg heard about it from Christine King, who leads tours at the Old Slave Mart Museum, he said he knew that more awareness was needed.

“It’s the right thing for us to tell even these difficult stories from the past to help unfold where we go into the future,” Tecklenburg said.

The Work House was also a place of resistance. Denmark Vesey was detained there. Vesey was a formerly enslaved man who bought his freedom and worked as a carpenter. Some years later, another enslaved man, Nicholas Kelly, was held at there as well, the plaque states.

Both men attempted to lead slave rebellions and were sentenced to death as a result.

Tecklenburg defended Vesey’s legacy in his speech, saying the Charleston of the 1820s was never capable of giving a Black person a fair trial. He said his legacy needs defending at time when some still refuse to see him as anything other than an insurrectionist.

After Vesey’s death, he became a martyr to Black residents, a freedom fighter whose legacy inspired generations to fight for equality, no matter how grave the risks. For Whites, he loomed a would-be murderer, a terrorist intent on killing them all.

It’s a reputation that was formed during his trial at the Work House. Recognizing where it came from is crucial, Tecklenburg said.

King helped lead the effort to erect the sign at the mayor’s request. But she didn’t see the unveiling of the plaque July 13 as an event that was hers to claim alone, pointing to her formerly enslaved great-grandfather and all other ancestors.

“When I say `ancestors’ I mean everyone,” she said. “This affected every Black person, not just those who were enslaved. For the ones who got their freedom, their freedom wasn’t really free. There were laws to limit it.”

In his recognition speech, Tecklenburg connected the site’s new plaque to his personal endeavor to reckon with the ways in which the city’s foundation was built on slavery and what to do about it now.

In 2018, City Council voted to issue a formal apology for its role in slavery. The Work House, which the city operated and profited from, is a prime example of that tie, Tecklenburg said.

Its goal is to identify city policies that can be changed to lessen the racial disparities seen across so much of public life in Charleston, from education access to health outcomes and financial stability. While city commissions can’t pass ordinances on their own, they are tasked with making recommendations to City Council.

None of the steps have come easily. The apology for slavery was approved in a 7-5 vote. The Human Affairs commission faced a coordinated campaign against it.

This resistance to acknowledging slavery’s ties to the present day is why the plaque was a necessary step in the right direction, Pastor Fred Wilkins said at the unveiling. His church, Spirit and Truth Southside Baptist Church, is around the corner.

“In a lot of ways we are still recovering from those times and the things that happened, even today,” Wilkins said.