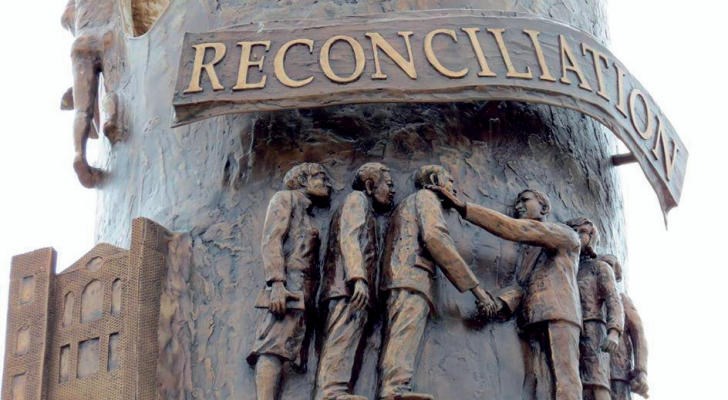 State Sen. Kevin Matthews, who represents the North Tulsa area where the massacre happened 100 years ago said the park, named in honor of Oklahoma native and noted American historian John Hope Franklin, provided the perfect backdrop for a message of reconciliation.

“We can be a beacon of reconciliation around the world,” Matthews said. “And ultimately, we can revive the spirit of Black Wall Street and cooperative economics that once lived here and that we want to see in a greater way in the future. “ Violence erupted May 31 and June 1 in 1921, when a white mob killed an estimated 300 people and wounded 800 while burning 30 blocks of Blackowned businesses and homes and neighborhood churches in the Greenwood neighborhood, also known as “ Black Wall Street.” Planes were even used to drop projectiles on the area, burning it to the ground.

A renewed search for bodies in 2020 found at least 12 in an unmarked mass grave in a Tulsa cemetery. A team led by Oklahoma’s state archaeologist has not been identified the bodies or confirmed they are victims of the massacre. But they were found in an area adjacent to two gravestones of victims and where old funeral home records show both identified and unidentified victims were buried.

Tulsa and the race massacre received new national interest over the summer when President Donald Trump picked the city for the first of his signature campaign rallies of the coronavirus era. His initial plan to hold the rally on Juneteenth the day the last enslaved African Americans learned they had been freed in 1865 _ also sparked interest in Tulsa’s turbulent racial legacy, although Trump later changed the date of his rally.

The 1921 Tulsa Race Massacre Commission has more centennial events planned throughout the year.

Next post It’s not only viruses that cause epidemics