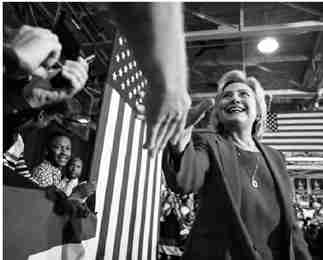 FRANKFORT, Ky. – Kentucky’s Republican governor said blood might be shed if Democrat Hillary Clinton is elected president. Speaking to the annual Values Voter Summit on Saturday in Washington, Bevin said he was asked if the country could ever recover if Clinton were elected president.

“I do think it would be possible, but at what price? At what price? The roots of the tree of liberty are watered by what? The blood, of who? The tyrants to be sure, but who else. The patriots,” Bevin said, referencing a quote from Thomas Jefferson. “Whose blood will be shed? It may be that of those in this room. It might be that of our children and grandchildren. I have nine children. It breaks my heart to think it might be their blood that is needed to redeem something, to reclaim something that we through our apathy and indifference have given away.”

In a statement provided by his office, Bevin clarified he was speaking about the sacrifice required of members of the military, saying “we cannot be complacent about the determination of radical Islamic extremists to destroy our freedoms.” “I would encourage anyone who truly cares about this issue to invest 15 minutes of time and listen to my comments in their entirety,” Bevin said. “Any intelligent person will easily understand the message I delivered.” Bevin’s comment seemed to echo the violent imagery of some comments made by Republican Donald Trump and some of his supporters. He has not formally endorsed Trump but has been supportive of the GOP nominee.

Last month, Trump said if Clinton is elected and gets to appoint federal judges, “there’s nothing you can do, folks.” He then added: “Although the Second Amendment people — maybe there is, I don’t know.”

Bevin is in his first term and is not on the ballot in November. But he is campaigning hard to help Republicans win a majority in Kentucky’s House of Representatives, the last legislative chamber in the South still controlled by Democrats.

He used his speech on Saturday to en- courage Christian voters to not be silent on issues they care about. “Look at the atrocity of abortion, so many have remained silent. It’s a slippery slope. First we’re killing children, then it’s ‘don’t ask don’t tell.’ Now it’s this gender-bending, don’t ask, don’t be a bigot, don’t be unreasonable, don’t be unenlightened, heaven forbid,” Bevin said, referring to policies on gays in the military and other LGBT issues.

Next post Man shot by Broward deputies had ‘rusty pocket-knife’

Previous post The Politics of Blackness: Playing the race card in the NFL