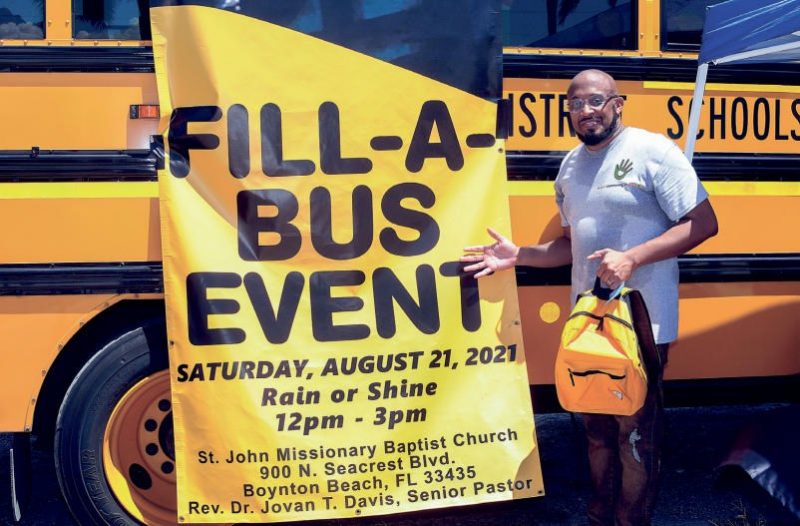 “But the principals say the supplies only last a short time,” added the leader of the church in the heart of the Black community in Boynton Beach. “I decided to partner with three schools in the area and have something like a marketplace at each school. All three schools are located near the church.”

Davis came up with the idea of Filla-Bus, in which patrons would load an entire school bus with goods and supplies which would last a school year instead of a month.

FOR THE UNDERSERVED The supplies would then be distributed among the three neighborhood elementary schools: Galaxy Elementary, Poinciana Elementary and Forest Park Elementary. All three are Title 1 schools supporting underserved communities. The supplies would be available to the students throughout the entire year. The Aug. 21 event was sponsored by the church and St. John Community Promise, Inc. Supporters constantly drove through the parking lot as volunteers grabbed their items from the trunk or back seat. Supporters never had to get out of their cars.

The bus, which was loaned to the church with support from Palm Beach County School Board member Dr. Debra Robinson, was ﬁlled to capacity. “We’re still dealing with this pandemic and people have needs,” said Davis. “I’ve been trying to, along with the members of St. John, be there for the community. We recognize their hardship and we want to take care of it.”

Minister Genine Rumph, author of the book “Journey through the Journals” and a member of the church, was on hand with numerous items to donate. She said she loved the concept of being there year-round for the families who need it.

IMPORTANT TO SUPPORT “Fill-a-Bus is a great fallback mechanism for both teachers and students during these stressful times of uncertainty,” said Rumph, who released her book nearly two years ago. “I donated supplies to the cause because it’s the moral thing to do in support of a worthy cause, which are our school children in Palm Beach County.”

Nikki Bethea, 29, of Greenacres, also a member of the church, brought her son, Joseph,7, with her when she dropped off her supplies of folders, copy paper, markers, scissors and more. She wants him to learn the art of giving.

“I’m able to give my son things, but many people are not,” Bethea said, moments after eager volunteers took bags of supplies from her trunk. “I felt it was important to be here to support this.”

Likewise, Girl Scout Troop 24514, was on hand to help out. “We’re the Girl Scout Troop from this church, and we teach in Girl Scouts, the importance of giving back to their own community,” said Noemi Vaden, one of the troop leaders.

GOING THE EXTRA MILE Wanda Thomas, who has been a Girl Scout troop leader at the church for 40 years, also has been a teacher at nearby Galaxy Elementary for 43 years. She said she knows the families’ struggles.

“We’re also giving out supplies during the second semester in January – and that’s important,” said Thomas. “This will help them continue their learning and will be helpful to the parents.”

Sandra Watson, a troop leader with the group for 30 years, says Fill-a-Bus goes the extra mile, which is critical. “This looks beyond just the ‘right-now.’ It looks into the future.“ Troop leader Donna Gibson summed up the day for the Scouts and for the community, saying, “Our troop is here because we emphasize volunteerism and community service in living form. We are a sister to everyone.”

Next post President Biden, you must do more to protect voting rights