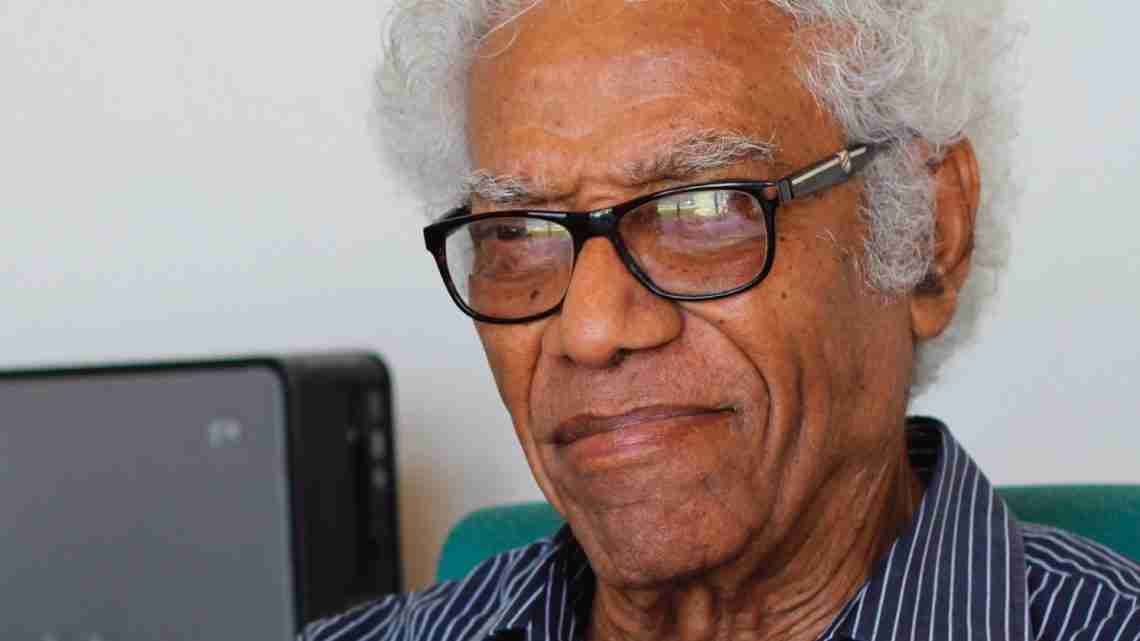 New York (AP) – George Lamming, a giant of post-colonial literature whose novels, essays and speeches influenced readers and peers in his native Barbados and around the world, has died at age 94.

His death this month was conﬁrmed by Barbados Prime Minister Mia Mottley, who said, “Wherever George Lamming went, he epitomized that voice and spirit that screamed Barbados and the Caribbean.” No cause of death was given.

Along with such contemporaries as Nobel laureate V.S. Naipaul, Kamau Brathwaite and John Hearne, Lamming was among a generation of post-World War II writers from the West Indies who came of age as British rule in their region was being challenged and spent at least part of their 20s in England. But unlike Naipaul, who settled in London and at times wrote disdainfully of his origins, Lamming returned home and became a moral, political and intellectual force for a newly independent country seeking to tell its own story.

“There is a kind of English which is used, say, in ofﬁcial situations, in the civil service context, in the context of parliament, in the context of school, and so on,” he once wrote. “But there was always, in any given territory, another kind of English, the English of popular speech, the language which the mass of population use.” Lamming had a broad, connective vision he would say was inspired in part by the Trinidadian historian-activist C.L.R. James. His calling was to address the crimes of history, unearth and preserve his native culture and forge a “collective sense” of the future.

In novels such as “In the Castle of My Skin” and “Season of Adventure” and in the nonﬁction “The Pleasures of Exile,” Lamming explored the Caribbean’s complicated legacy – as a destination for enslaved people abducted and shipped from Africa, as a colonial proving ground for England and as an uneasy neighbor of the United States, practitioners of “the deceptive magic of the dream of milk and honey.” Lamming received his greatest acclaim for “In the Castle of My Skin,” its title drawn from an early poem by Nobel laureate Derek Walcott. Published in 1953, the novel is a semi-autobiographical narrative based in a Caribbean village uprooted by colonialism and proﬁt taking.

“In the Castle of My Skin” was structured in part as a coming-of-age story about a boy who begins drifting from his peers when he’s admitted into a more exclusive high school. But it’s also a eulogy – for villagers left homeless, for trees cut down, land sold off and buildings razed, for the way of life being dismantled.

“The Village, you might say, is the central character,” Lamming wrote in an introduction to a 1983 reissue of the novel. “The Village sings, the Village dances, and since the word is their only rescue, all the resources of a vital oral folk tradition are summoned to bear witness to the essential humanity which rebukes the wretchedness of their predicament.”

Lamming’s novels “The Emigrants” and “Season of Adventure” drew upon his years in England, and his disenchantment with the British culture he had been conditioned to emulate. He lived for more than a decade in London, but would think of it as a cold and alienated place, where no one asked after each other and one could feel entirely alone even when living closely to hundreds of others.

“I became a West Indian in England,” he said during a 2013 interview for the National Cultural Foundation of Barbados.

Lamming revisited and reinvented not just his personal history, but the distant past, which he saw as a battle for decolonization of the mind. “Natives of My Person” was an imagined voyage on a slave ship whose captain no longer believes in their mission. In a novel he was working on late in his life, he imagined Christopher Columbus arrested by natives in the West Indies, “stripped naked” and his hands and legs in chains.” Pleads Columbus: “My errors have not been committed with intention to do ill.”

He was also greatly influenced by Shakespeare’s “The Tempest” and the slave Caliban, whom Lamming saw as a symbol for the colonial voice waiting to be heard. His novel “Water With Berries” is a modern retelling of Shakespeare’s play and “The Pleasures of Exile” explores in depth the upending of Prospero’s authority over Caliban. “The old blackmail of Language simply won’t work any longer,” he wrote. “For the language of modern politics is no longer Prospero’s exclusive vocabulary. It is Caliban’s as well; and since there is no absolute from which a moral prescription may come, Caliban is at liberty to choose the meaning of this moment.”

Lamming’s admirers ranged from Richard Wright, who wrote the introduction to the U.S. edition of “In the Castle of My Skin,” to Jean-Paul Sartre to Kenyan author Ngugi wa Thiong’o.

In 2008, he was presented the Order of the Caribbean Community for his “intellectual energy, constancy of vision, and an unswerving dedication to the ideals of freedom and sovereignty.” Six years later, Lamming received the Anisﬁeld-Wolf lifetime achievement award for his “deeply political books that critique colonialism and neo-colonialism.”

Lamming was born near the capitol city, Bridgetown, in what he called a “bad village,” where Black was identiﬁed with the “cheapness of labour” and white symbolized power. In school, he would fear being asked where he lived, and on walks home with more affluent classmates he would sometimes see his mother and worry whether he should acknowledge her.

“When I hear people discussing class, I did not discover in Marx. I lived it, from the age of 10,” he later wrote.

Like the protagonist of “In the Castle of My Skin,” he was accepted into an elite high school and was encouraged by one teacher to write poetry. Lamming found a job teaching at a boys school in Trinidad before following a similar path to many contemporaries and emigrating to England in 1950, journeying on the same boat across the ocean as the Trinidadian author Sam Selvon. In London, he wrote poetry and stories and worked in programming for the BBC.

Meanwhile, as Lamming began “Castle of My Skin,” Barbados was breaking from the British. Demands for democratization had been growing since the 1930s and by the time Lamming had departed overseas, the right to vote had been expanded beyond wealthy men to include women and the lower classes. A regional federation in the 1950s gave way to independence for Barbados, Trinidad and other Caribbean countries in the following decades.

“The numerical superiority of the Black mass could forge a political authority of their own making, and provide an alternative direction for the society,” Lamming later wrote. “In the desolate, frozen heart of London, at the age of 23, I tried to reconstruct the world of my childhood and early adolescence. It was also the world of a whole Caribbean reality.”