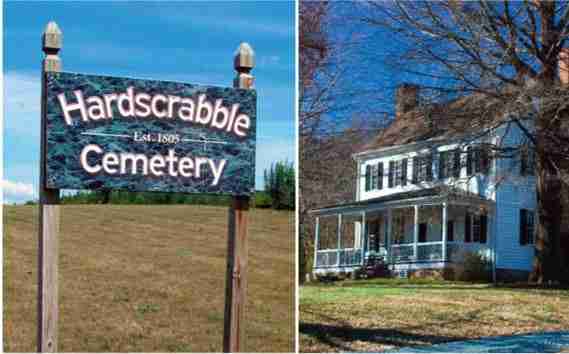 Carrboro, N.C. (AP) – The graves are marked only with ﬁeldstone. It’s a burial ground invisible to the untrained eye, tucked in the hardwood forest along the Orange-Durham county line, several dozen rough, mossy rocks guarding faint depressions in the ground.

The cemetery is believed to contain the remains of people enslaved on Hardscrabble Plantation in the 1800s – and it was nearly lost to history as the landowners considered developing. But in an overflowing conference room on the third floor of the Orange County Register of Deeds, the deed for the property was recently conveyed to a nonproﬁt run by descendants of some of the buried so it will be preserved, even if homes rise around it.

Beverly Scarlett, who runs the nonproﬁt with her sister, called it a “profound” gift.

“Our ancestors paid a price for us to live the quality of life that we live today. And we can just do a few things to keep their memory alive: recognize and honor those sacred spaces … recognize and honor our elders,” Scarlett said. “And just treat everybody the way you wish to be treated.”

The cemetery’s presence was unknown to the Parsley family, who owned the land, but a neighbor whose family has been there for generations saw the Realtor on the land and let him know about its presence earlier in the spring.

“Unless you’re looking for it, you wouldn’t ﬁnd it,” James Parsley said in an interview. “Nature has taken over the whole property.”

The Parsleys had a surveyor come to the property, who conﬁrmed it was a cemetery containing up to 75 graves. Three more infant graves under a fallen a tree have since been identiﬁed.

Hardscrabble Plantation was located along what is now St. Mary’s Road in Durham County less than a mile from the Orange County line. The home still stands.

“St. Mary’s Road is a part of the old Indian trading path. You get on it in Petersburg, Va., and it’ll take you all the way south to Augusta, Ga.,” Scarlett said.

The Cain family, then well connected in state politics, operated the 4,400-acre plantation that enslaved 95 people as of 1830, historical records show.

“Gangsta Boo was like a sister to me and told the world about me the way my blood brother did,” Drumma Boy said in a statement. “We both are Leos and share the same energy towards

That made William Cain the largest landowner in Orange County in 1800, according to the historical archive Open Durham.

The workers produced tobacco and cotton, plus oats, wheat and corn.

The Cain family sold the last of their land in the 1970s. Most of it became a subdivision with several dozen homes bearing the familiar Hardscrabble name.

Scarlett, a retired District Court Judge, said she and other descendants of those enslaved on Hardscrabble Plantation have mixed heritage.

“We are what I consider `maroon people’ in that we are a blend of African American, Native American and white,” she told The News & Observer. Their nonproﬁt is called Indigenous Memories Inc.

“Our people were in and out of slavery, even the ones who were not unity and seeing people happy! This is just such a devastating loss cuz she always wanted to see others win! RIP to the Queen Of Memphis, forever my sister.” brought there by deed. You could be abducted and sold into slavery on the courthouse steps in Hillsborough,” Scarlett said.

There are two other burial grounds just west, all marked differently, which Scarlett said reveals information about who lies beneath the earth.

“It’s like history telling its own story,” Scarlett said. “So you have your ancient people who occupied the land, then you have your blended people. …. Come back east a little bit further and you have a cemetery where everybody was enslaved.”

Parsley and his wife, Carolyn, who live in Hillsborough, were at the ceremony to donate the acre to Indigenous Memories.

The Parsley brothers have owned over 100 acres along St. Mary’s Road since the early 1970s. They’ve cut some timber over the years, but left the land largely untouched until a few years ago, when they began splitting off some lots and considering developers’ offers.

“I decided it was more important to protect it and give it a future,” Parsley said of the cemetery. “This needed not to be part of some development. I’m just really pleased to be able to pass it to somebody who’s gonna respect and take care of it.” Orange County Register of Deeds Mark Chilton has been working to catalog the handwritten deeds, wills and slave transactions from the 1700s and 1800s that reveal information about Orange County’s Black and Indigenous people.

“I’ve got to say sometimes doing this research can be very depressing,” Chilton said. “It can be very sad to see how cruelly people were treated and how difficult their fates were back in that day.

“But their families live on. … Many of y’all in the room, who were introduced a few minutes ago, are descendants who are here with us because of these people’s will to go on.”