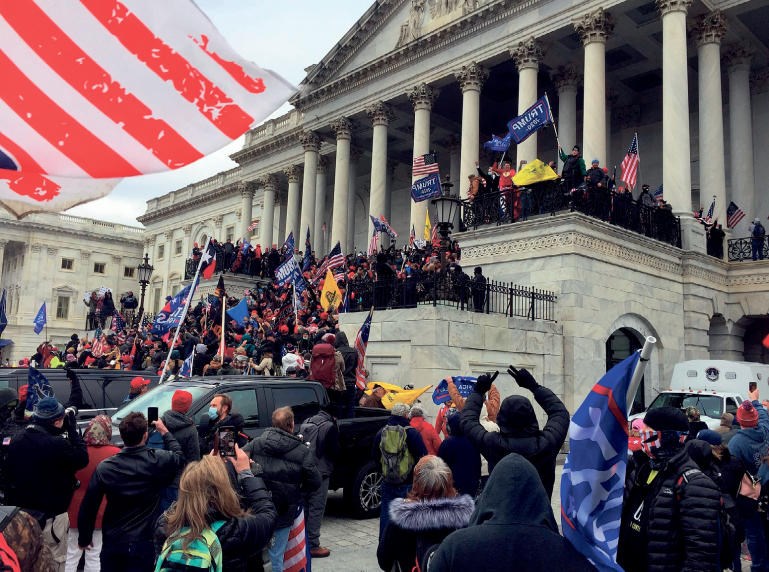 In this time of coronavirus/COVID-19, “herd immunity” has become a familiar phase but there are two versions. One says that nobody should be vaccinated, allowing everybody to be infected and the virus simply disappears. The scientiﬁc version is that everybody – or at least a sufﬁcient number of people – should be vaccinated, making the population immune.

It is an absorbing intellectual exercise trying to determine which version applies to European Americans – the socalled white people – that has caused them to become immune to the reality of their original sin and the continuing agony of the descendants of the four million enslaved African Americans – the so-called black people.

Israeli historian Yuval Noah Harari in his book “Sapiens – A Brief History of Humankind” notes that a country is a physical space but a nation is a concept that embodies a consensus among those who live in that space as to how they want to order their existence in it. The consensus which led to the creation of the idea of the “United States” in 1776 is the Constitution.

That social compact has been periodically amended but the attitude of the majority population, as reflected in the functioning of the governing institutions, has not changed enough to elevate into the consensus the descendants of the former slaves.

Every bold step to expand the consensus has been met with ﬁerce resistance, going back to the ill-fated “40 acres and a mule” initiative and Reconstruction. Even slight inroads into political inclusion and business ownership have been met with terrorism. It took 100 years for the descendants of the freed slaves to be legally granted the same political status as the majority. Now, more than 50 years after the Civil Rights Act and the Voting Rights Act, steps are being taken to roll back their provisions.

A generous interpretation of why this is happening would be to blame collective amnesia, that the trauma of owning other human beings as property has led to a closing of the mind to the reality of slavery. But the history is very much alive at the Museum of African American History in the nation’s capital, at the Legacy Museum and the National Memorial for Peace and Justice in Montgomery, Alabama, in The New York Times 1619 Project and in the work of researchers.

University professor Channing Gerard Joseph met his great-great-great-greatgreat-grandfather as he researched his ancestry. “Stephen and the people sold with him spent their lives laboring without compensation from sunrise to sunset six days a week, solely for the economic beneﬁt and comfort of their masters,” Joseph writes in Nation. “They risked whippings or death if they attempted to escape, yet, as they stepped up to the auction block before potential bidders, each of them knew—if they were old enough to be aware of what was happening – that they could be sold to a master who would permanently separate them from their loved ones. Prospective buyers looked in their mouths, felt their bodies – even groped the breasts of women and girls – as they inspected the ‘merchandise.’”

Yet, the Minority Leader of the United States Senate, Mitch McConnell of Kentucky, felt compelled last week to demand that the 1619 Project be excluded from school curricula, describing this unflinching history of the United States as “divisive nonsense” and teaching it equals saying “our country is inherently evil.”

McConnell and other critics of full African American inclusion in the national consensus cannot erase from history the fact that, in 1619, a ship with enslaved human beings landed at what later became the United States or the terrorism which the descendants of the enslaved have had to face. Between 1882 and 1965, 4,400 African American men, women and even children were killed: burned alive, dragged behind cars or hanged, body parts taken as souvenirs and postcards made of the lynching.

The resulting “criminal” record prevents millions of African American men from ﬁnding good jobs and raising families when released and has barred them from full citizenship, including, as in the case of Florida, the right to vote. Yet, this same system has enabled European American men to prosper, such as Amazon founder Jeff Bezos, worth $177 billion; Tesla founder Elon Musk, $151 billion; Microsoft founder Bill Gates; $124 billion; Facebook founder Mark Zuckerberg, $97 billion; and Berkshire Hathaway founder Warren Buffett, $96 billion.

The discrimination extends into other areas, notably environmental racism, including exposure to toxic chemicals which cause “health problems such as premature death in people with heart or lung disease, heart attacks, irregular heartbeats and asthma,” the Associated Press (AP) reported. They lag far behind in every other aspects of life, whether education, health care, bank loans, employment and wages, 156 years after their ancestors were freed from slavery.

Many millions of European Americans probably acknowledge that the American consensus is incomplete. Buit efforts to do something about it are woefully inadequate. For the time being, it is necessary to understand that the really aggrieved Americans are not those who lament the end of slavery. It is the nearly 50 million descendants of slaves and they have not stormed the U.S. Capitol – yet.