What we think: AFSCME must restore UNCF funding 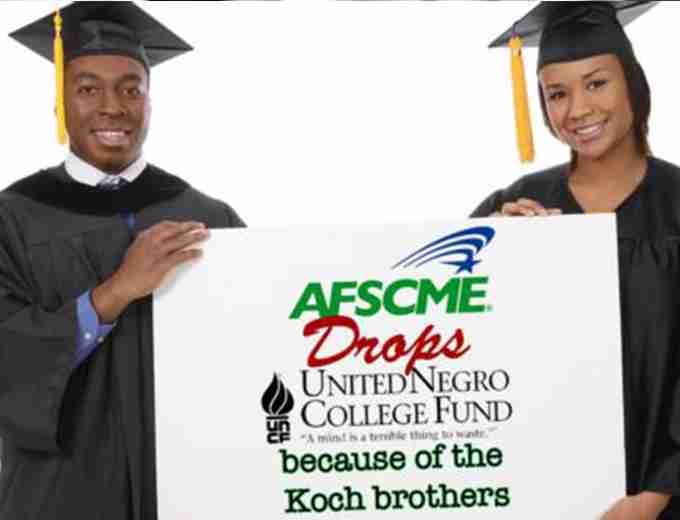 The furor which broke out in early June after the United Negro College Fund (UNCF) announced acceptance of $25 million from Koch Industries and the Charles Koch Foundation has gained momentum with the American Federation of State, County and Municipal Employees (AFSCME) severing ties with the fund.

[optinlocker]The billionaire Koch brothers Charles and David have doled out hundreds of millions of dollars to support organizations that have laid siege to many initiatives which have helped African Americans enter the middle class and, some of which have launched a frontal assault on voting rights resulting in severely hampering the ability of blacks to vote.

Since its founding in the 1944, the UNCF has grown into a shining star in the black constellation. The fund has made possible the financing of college education for thousands of African Americans. AFSCME, a leading representative of black employees, has been especially supportive of UNCF’s efforts but, expectedly, opposed the political focus of the Kochs.

But, in fact, while their goals may be similar, they are not identical.

UNCF raises funds from all sources and there is no indication that its mission limits it to those with a particular political or business philosophy. AFSCME’s purpose is to promote the interests of its members. This should not be a case of the friend of my enemy is my enemy.

At the same time, the UNCF has an obligation to ensure that the money from the Kochs buys absolutely nothing and serves no other purpose than to further the education of African Americans. Having two representatives of the Kochs on a five-member panel controlling how the money is spent rings alarm bells and the fund must move swiftly to affirm its independence from the Kochs – or any other donor.

That is critical in light of the rather misguided decision by its president, Michael Lomax, to attend a Koch-sponsored conference in California whose purpose was to advance the far-right agenda of the billionaire brothers. His presence at the gathering, as critics rightly have said, could be interpreted as support for Koch philosophy and politics. In fact, that is what the AFSCME said led to its break with the fund.

Mr. Lomax can make a case for accepting the donation. But he cannot justify allowing himself to be used by the Kochs. He has to acknowledge that serious mistake and provide the strongest possible assurance that one does not have to do with the other.

Given the UNCF’s mission and the mission and membership of AFSCME, the union’s funding of African-American scholarships through the UNCF should be restored immediately. The power of collective funds that are managed by the UNCF is incapable of duplication by any individual donors.