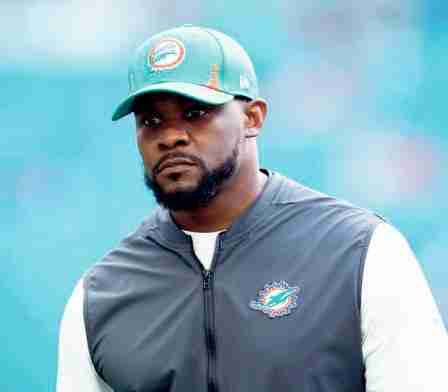 New York (AP) — Fired Miami Dolphins coach Brian Flores, suing the NFL and three teams Tuesday over alleged racist hiring practices for aspiring coaches, is alleging the Dolphins offered him $100,000 a game his ﬁrst season to “tank” so the club could secure the top draft pick.

The lawsuit in Manhattan federal court sought class-action status and unspeciﬁed damages from the league, the Dolphins, the Denver Broncos and the New York Giants, along with unidentiﬁed individuals.

Flores was ﬁred last month by Miami after leading the Dolphins to a 24-25 record over three years. They went 9-8 in their second straight winning season, but failed to make the playoffs during his tenure.

In a statement released by the law ﬁrm representing him, Flores said: “God has gifted me with a special talent to coach the game of football, but the need for change is bigger than my personal goals.”

“In making the decision to ﬁle the class action complaint today, I understand that I may be risking coaching the game that I love and that has done so much for my family and me. My sincere hope is that by standing up against systemic racism in the NFL, others will join me to ensure that positive change is made for generations to come,” he said.

In a statement, the NFL said it will defend “against these claims, which are without merit.”

It added: “The NFL and our clubs are deeply committed to ensuring equitable employment practices and continue to make progress in providing equitable opportunities throughout our organizations.

Diversity is core to everything we do, and there are few issues on which our clubs and our internal leadership team spend more time.”

The lawsuit alleges that the league has discriminated against Flores and other Black coaches for racial reasons, denying them positions as head coaches, offensive and defensive coordinators and quarterbacks coaches, as well as general managers.

According to the lawsuit, Miami Dolphins owner Stephen Ross told Flores he would pay him $100,000 for every loss during the coach’s ﬁrst season because he wanted the club to “tank” so it could get the draft’s top pick.

The lawsuit alleged that Ross then pressured Flores to recruit a prominent quarterback in violation of the league’s tampering rules. When Flores refused, he was cast as the “angry Black man” who is difﬁcult to work with and was derided until he was ﬁred, the suit said. Messages left with the Dolphins seeking comment were not immediately returned.

The lawsuit said the ﬁring of Flores was typical for Black coaches who are not given the latitude other coaches receive to succeed. It noted that Flores led the Dolphins to back-to-back winning seasons for the ﬁrst time since 2003.

Last week, the Giants disclosed to third parties that they had decided to hire Brian Daboll as their new coach even when they had not yet had their scheduled meeting with Flores, the lawsuit said.

“Mr. Flores was deceptively led to believe he actually had a chance at this job,” the lawsuit said, adding that he had to endure a dinner with the Giants’ new general manager knowing that the team had already selected Daboll.

Previous post Bomb threats made to historically Black colleges, universities across US