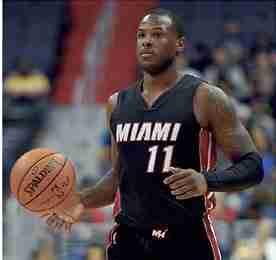 CLEVELAND — LeBron James didn’t need to speak with Andrew Bogut or see the X-rays on the center’s leg.

In an ugly instant, Cleveland lost much more than a game Monday night.

Bogut broke his left leg less than one minute into his debut and the Cavaliers never recovered while being outgunned 106-98 by the surging and not-to-be- overlooked Miami Heat, who beat the NBA champions twice in three nights.

Dion Waiters scored 29 points, Goran Dragic added 21 and the Heat held off a late rally by the Cavs, who trimmed a 20- point deficit to 103-98 in the final minute. It could have gotten tighter but James missed a long 3-pointer before Waiters banked one in with 12.2 seconds left.

However, Miami’s latest impressive win was overshadowed by the injury to Bogut, who only signed with Cleveland last week and had been welcomed to the team earlier in the day by being given jersey No. 6.5 – a joke that made the big Australian smile.

Now, though, the Cavs don’t know when or if Bogut will be able to help defend their title.

“It’s very deflating,” James said. “It’s a tough moment. We all were excited about the acquisition, you know, bring him in here. It’s a tough one, not only obviously for him, first of all, but then for our ballclub.”

Kyrie Irving scored 32 and James had 30 points and 17 rebounds for Cleveland, which was beaten by 22 on Saturday in Miami while James and Irving got some rest.

The Heat have won 19 of 23, including victories over Golden State, Houston and two over the Cavs, who may have to find another rim protector. The 32-year-old Bogut was on the court for just 58 seconds before going down with the injury, a devastating blow to the former No. 1 overall pick who spent the past four seasons with Golden State was hoping to meet with the Warriors again.

Bogut was on the perimeter guarding Miami’s Okaro White, whose knee connected with the center’s lower leg. Bogut crumpled to the floor in obvious pain and as he sat up near the scorer’s table, TV cameras caught him telling his teammates his leg was broken.

“As soon as the collision happened I heard it break,” James said. “I went over to him and I knew it.”

Bogut was unable to put any weight on his leg as he was helped to the locker room by new teammates Tristan Thompson and James Jones. The Cavs said initial X-rays revealed a fractured tibia and Bogut was taken to the Cleveland Clinic for further tests.

It was a cruel setback for Bogut, who just a little earlier was cracking jokes about Vladimir Putin and talking about house shopping in his new NBA home.

Bogut’s injury sent a chill through the Cleveland crowd and seemed to affect the Cavs, who were without coach Tyronn Lue and were out of rhythm even before the big man dropped to the floor clutching his leg in obvious pain.

“It took the air out of the whole building,” James said. “You heard it from the fans when he went down and we was just hoping for the best.”

Miami’s win on Saturday ended with injured Cavs guard J.R. Smith being restrained and escorted from the floor by security after jawing with Waiters and Heat rookie Rodney McGruder.

There was no carry-over – other than the Heat having their way with the Cavs for most of the night.

“We believe in ourselves first and foremost,” Waiters said. “If other people don’t, I think we did a good job of opening their eyes by the way we’ve been playing. We’ve just got to continue to fly under the radar, just keep piling wins up and make that push.”

Heat: Dropped 16 3s after making a season-high 18 on Saturday. … F Luke Babbitt did not play after the first quarter because of back spasms. … F James Johnson (elbow stitches) and G Tyler Johnson (sore neck, shoulder) sat out with injuries. … Miami came in allowing a league-low 23.8 points and 41.7 percent shooting in the fourth quarter.

Cavaliers: Smith may be just days away from his return after missing nearly three months following thumb surgery. He played some 3-on-3 before the game. Kevin Love moved remarkably well while doing agility and shooting drills following the team’s morning shootaround.

The All-Star underwent surgery on Feb. 14 and the team estimated he could be out up to six weeks. … Irving has scored at least 20 in 12 consecutive games.

Perhaps still riled up over his exchange with Smith, Waiters seemed motivated to punish his former team and scored 24 in the first half.

“Guys like that, you can’t let them get going,” said Cavs assistant Larry Drew, who sat in for Lue. “They make a couple shots and the basket starts looking a little bigger and bigger and bigger.”