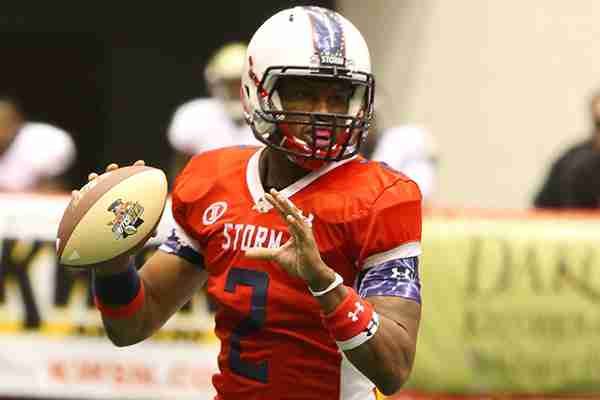 SIOUX FALLS, S.D. — A man widely considered one of the greatest Indoor Football League quarterbacks in history is calling it a career.

Sioux Falls Storm signal-caller Chris Dixon, 32, said in a statement Thursday that he is retiring after a decade-long career, during which he threw for more than 25,000 yards and 600 touchdowns, with only 70 interceptions. He cites his age and family considerations.

“I have had a great career and have had the chance to meet so many great people and to play with some amazing teammates,” Dixon said. “I have been extremely blessed to play in to great sports cities, but today it’s more about my children’s dreams than my own.”

Dixon led the Storm and the now-defunct Billings Outlaws to five Indoor Football League titles, and was named the league’s most valuable player three times.

He also has had stints with several teams in the Arena Football League, the highest level of indoor football, and currently is on the roster of the Tampa Bay Storm. He joined that team after leading Sioux Falls to its third IFL crown on June 28.

Dixon, a native of Oakland, California, played college football at Humboldt State University in Arcata, California. He plans to move back to Billings.

Previous post CAUSE SOUGHT FOR GUNFIGHT BETWEEN PATIENT DOCTOR