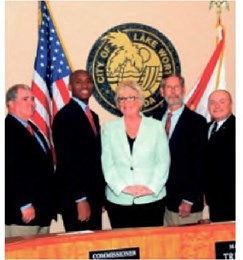 During a workshop drenched in anti-immigrant and racist overtones, Lake Worth commissioners laid the groundwork for an ongoing code enforcement crackdown on low-income residents in some of the city’s poorest sections.

The goal: to push out low-income residents and ward off outsiders who don’t fit preferred demographics.

Lake Worth, population 38,000, bills itself as “an extraordinary place where tranquility meets creativity. Where the sun shines bright, and the ideas shine even brighter.”

Here’s one bright idea uttered last July by Vice Mayor Scott Maxwell more than four hours into a discussion about commissioners’ visions for Lake Worth: “We have to change the demographics, but no one is willing to say it…Lake Worth is the default repository for the poor and indigent.”

To achieve their goal of reconstituting Lake Worth’s population, Hardy said the city can use code enforcement and law enforcement as “the stick” to go after owners of dilapidated properties.

“We do it through law enforcement, through code enforcement and through land development regulations that can encourage someone to sell their property for a lot more to someone else who can build something on top of it,” Hardy said.

A code enforcement citation handed out by Lake Worth this month as part of a crackdown on poor residents.

The video of the July 24, 2018 workshop has gone unreported until now. A nonprofit organization called Palm Beach County Tenants Union alerted Florida Bulldog to the video’s existence amid an aggressive code enforcement campaign to remove derelict vehicles from streets and driveways as well as to slap building violations on dozens of mobile homes in Lake Worth’s poorest neighborhoods.

“We found this video and it corroborated our belief that the city was targeting immigrant, low income neighborhoods in massive code sweeps,” the tenants union said in a statement. “This is not about helping poor renters and property owners. This is about displacing those who do not fit the vision of the city’s redevelopment plan.”

Lake Worth is no stranger to selective code enforcement against minorities. In 2006, the city settled a federal lawsuitfiled on behalf of eight Guatemalans who were evicted from their homes following heavyhanded inspections by code enforcement officers and sheriff’s deputies. The Florida Equal Justice Center, which represented the low-income immigrants, accused Lake Worth authorities of selectively targeting homes occupied by Guatemalan residents.

Over the past year, the tenants union has tracked the city’s use of a $300,000 federal community block grant to fund a citywide sweep of broken-down cars and vehicles without valid license plates. In November and December alone, the city “redtagged” 593 vehicles, towing away more than half that were parked on private properties, according to an analysis of the code enforcement citations issued during those two months and a Google map identifying the location of the vehicles that the tenants union provided Florida Bulldog.

“Instead of using grant money meant to help low-income neighborhoods, they used it to go on door-to-door sweeps with sheriff’s deputies, intimidating residents in immigrant neighborhoods and fining them for things like flat tires & towing their work trailers from their own driveways,” a tenants union member said. “These are low-income neighborhoods with a large Guatemalan and Haitian population.”

The tenants union member was one of three Lake Worth residents who spoke on the condition of anonymity because they fear city authorities will retaliate against them. In addition to towing vehicles, Lake Worth code enforcement officers in early January launched a sweep into the Holiday II Mobile Home Park.

“The city set up a meeting with residents there,” the union member said. “They brought pizza and kids’ toys, and then proceeded to awkwardly tell the residents through a translator that code enforcement would be inspecting everyone’s mobile homes for compliance, and they would have to tear off any additions at their own expense.”

Code enforcement officers have cited the owners of nearly half of the 70 trailers at Holiday II, according to the second anonymous resident, a Guatemalan woman who received six violations, including for peeling exterior paint on her trailer, failing to remove old tree stumps and not having a valid trailer registration.

Some of her neighbors have received violations for illegal additions that were already part of the mobile homes when they purchased the trailers, the woman said. “Some of the fines are for $150, $200 and $300,” she said. “I have lived here for five years. I bought it for $2,000 and spent about $10,000 fixing it up.”

The woman said residents are scared they won’t be able to pass subsequent inspections and be forced out of their trailers. “Some neighbors are saying we should look for a new place to live,” she said. “But I don’t want to leave. Uprooting my children is not easy and moving will be very expensive. It’s hard to find a three-bedroom house that my husband and I can afford to rent.”

Next post Detective: Officer’s statement on shooting had discrepancies