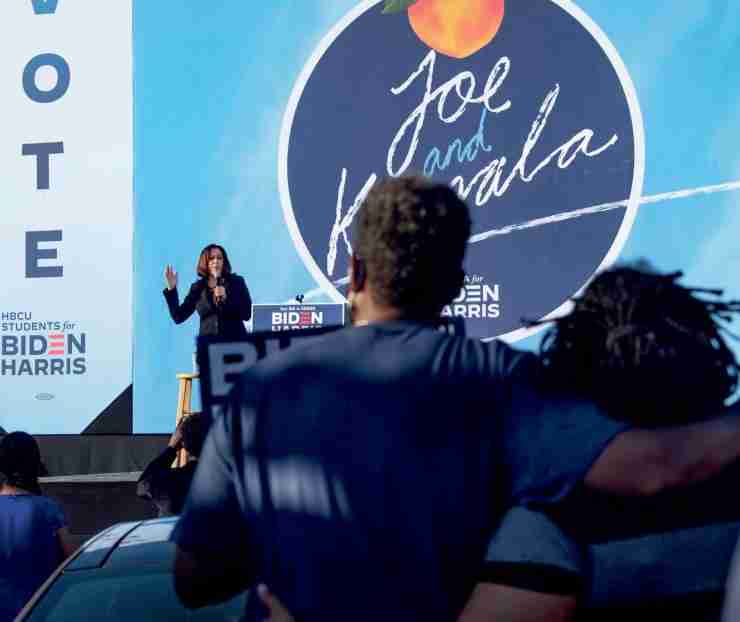 Atlanta (AP) – Democratic vice presidential hopeful Kamala Harris has made a direct appeal to Black men, defending her record as a prosecutor, blasting President Donald Trump as “racist” and vouching for Joe Biden as a man capable of addressing systemic racism and leading a diverse country. “I’m not going to tell anybody, including Black men, that they’re supposed to vote for us. We need to earn that vote,” Harris told a roundtable of Black men in one of several stops across Atlanta, the Democratic base of Georgia, an emerging battleground state on Friday.

The California senator warned that Trump wants to “turn 20% of Black men in favor of him,” a mark that could tilt a range of battleground states in the South and Upper Midwest to the president. But Harris, the ﬁrst Black woman on a major party’s national ticket, said Trump’s pitch is rooted in “spinning” and misrepresenting her record and the Democratic ticket’s proposals.

“Joe Biden has the ability to say the words `Black Lives Matter,’ unlike that other fella,” Harris told a group of students from Atlanta’s historically Black college campuses.

Still, Harris faced new questions Friday about her record as a prosecutor. She cast herself as a change agent in a “flawed” structure and promised that a Biden White House would understand that “Black boys and Black men have to be seen through the prism of life” and that “these systems have failed them.” Her Georgia itinerary – small events with Black audiences, a stop at an iconic Black-owned restaurant near Atlanta’s HBCU campuses and a drivein rally at Morehouse College, whose alumni include Martin Luther King Jr. – highlighted how critical the Biden campaign sees Harris in its efforts to urge Black turnout.

“We’re not going to let anyone mess with our right to vote,” she said at Morehouse, calling voting a way “to honor the ancestors.” EXCEPT LINCOLN

The drop-off in Black votes from President Barack Obama’s reelection in 2012 to the 2016 election was a critical factor in Trump managing narrow victories over Democrat Hillary Clinton in Wisconsin, Michigan and Pennsylvania, a trio of Great Lakes states that gave the president his Electoral College majority. Higher Black turnout also could push North Carolina, Georgia and Florida into the Democratic column.

Harris visited Georgia a day after the ﬁnal presidential debate, which Trump used to claim that “nobody has done what I’ve done” for Black Americans, “with the exception of Abraham Lincoln – possible exception.” The president blamed Biden for the mass incarceration of “young Black men” via a sweeping 1994 federal crime bill when Biden was a senator representing Delaware.

Biden touted his support of civil rights measures over the years and said Trump “pours fuel on every single racist ﬁre.” But it was Harris in Atlanta who confronted the issue of race with a personal pitch that neither of the white men at the top of the ballot can muster.

Citing her time as a local district attorney and state attorney general, Harris said she learned that the “war on drugs was, by every measure, a failure, and Black men were hit the hardest.” She said Biden would push to decriminalize marijuana and expunge existing convictions from records – though the former vice president has opposed legalizing it altogether. She promised sweeping programs to expand health care access, capital for small businesses and educational opportunities for struggling communities, all matters aimed at racial disparities.

Among the friendly audiences, though, Atlanta rapper and producer Jermaine Dupri told Harris that “you put a lot of Black brothers away in your past” and asked her to explain her record.

“Yes, I decided to go up the rough side of the mountain, as we say in church,” Harris told him, framing her career choice as a conscious decision to change a “flawed” system from within. She rattled off several efforts, describing a reentry program that she said steered young men arrested or convicted of nonviolent drug offenses into jobs. “They referred to my program as a `hug a thug’ program,” she said.

Harris acknowledged she didn’t “change the whole system,” but pushed back on the criticism. “It suggests Black people shouldn’t be prosecutors. … It suggests that you don’t love your community, or you don’t want to reform the system if you decide to go in it.”

She told the group of Black men that Trump is “spinning” her record and Biden’s to obscure his own priorities on race and ethnicity, from his “birtherism” lies about Obama’s birthplace to his insults of certain political opponents and entire nations.

Trump, Harris said, pushed “the theme that the ﬁrst Black man to be president of the United States was illegitimately there” and referred “to countries on the continent as `shithole’ countries” and “refused to condemn white supremacists.”

At Morehouse, she mused about sometimes being asked whether Trump is racist. “Yes,” Harris said. “It’s not like it’s some random one-off.” Biden, she added, would be a president “who acknowledges systemic racism, who acknowledges the history of America, and uses that bully pulpit and that microphone in a way that speaks truth … and brings our country together.”