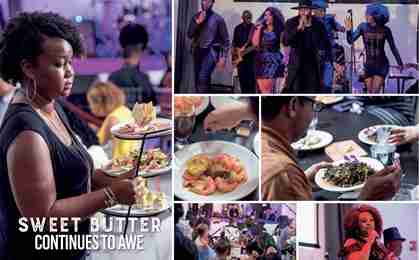 Sweet Butter has drawn thousands of guests and received rave reviews since it began it’s pop-up restaurant concept in February.

Conceptualized and curated by Ernisha Randolph of the catering company, Juanita’s Kitchen, Sweet Butter hosted its third series of the pop-up restaurant concept in Overtown with four sold out shows and more than 340 foodies in mid-July.

Between a curated menu of traditional dishes from the deep South to the drumline band that welcomed guests and passerbys with a processional around the venue, the last Sweet Butter Dinner Show was a celebration of Southern culture.

The immersive experience had guests on their feet dancing, waving their hands, and some even grabbing the mic when lead songstress Sarah Gracel (who recently performed in Mirarmar’s production of “Dream Girls”) stepped down from the stage to interact with the crowd.

The shows’ turnouts are proof the community has been yearning for entertainment options for mature professionals that appreciate excellent food, culture and live music.

Sweet Butter hosted prior shows in February and April, totaling 11 events that drew more than 1,000 guests since the concept launched earlier this year. But Randolph said July’s iteration was the best one yet.

“This was the best pop-up to date. We’ve gotten the chance to perfect our pop-up model since we started back in February. The menu was reflective of our (blacks’) historical journey here in the US. We told the story of James Hemmings, who was Thomas Jeffersons slave and chef and who was the creator and originator of mac & cheese as we know it. We indulged in traditional dishes like shrimp boil, country greens, chicken & waffles, and gave new spins by adding dishes such as lobster & grits and orzo jambalaya. The show was longer and included a new character who was our host for the evening ‘A Butter Soul.’ Everything has gone to new heights from our costumes to the menu to the service,” she said.

Ultimately, Randolph has plans to open a physical restaurant where guests can expect the same Southern cuisine daily.

“I’m excited because by the time we open our restaurant, we will have worked out many kinks that new restaurants don’t usually have the luxury of working out until after a year of being in business … that and marketing and promotion was the purpose of us hosting pop ups for one year before opening. My team and I agree that this year has proven to be more successful than we could have imagined,” Randolph said.

For now, Sweet Butter will continue bringing good entertainment to its community and fielding requests from other markets who also want to bring the traveling dinner show to their city.

Next post Six questions to ask your kids after school