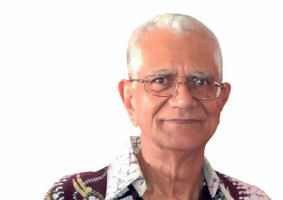 Here is a brain teaser.

But first the scenario:

Donald Trump persuaded Georgia elections officials to “find” the 11,780 votes he asked for and several other key states reported enhanced totals, pushing him past Joe Biden in the 2020 presidential race.

Hearing that Congress would be convening in a joint session on Jan. 6 to verify the electoral votes and declare Trump the winner, thousands of African Americans, finally having had enough after 402 years of oppression, decide to march on the U.S. Capitol during the special session.

Here is the brain teaser: How do the authorities respond?

One obvious answer is that, emboldened by Trump’s continuing presidency, they activate the National Guard, the Army and the Air Force, round up the protesters before they even reach the Capitol grounds and fly them out of the country. While they are at it, they also corral all African Americans and deport them; after all, they were never given “green cards.” All 42 million are taken to Africa and Haiti – 55 countries – about 763,636 each.

End of the “replacement” threat. The European American nation is finally saved.

Not really, though such a scenario cannot be more unreal than some of the conspiracy theories which tens of millions of Americans now live by. And it would not be surprising if there is, indeed, such a plan somewhere authored by Trump’s Emigration Czar Stephen Miller.

But that is not it. Think more along the lines of Lafeyette Square Park, in Washington, D.C., where, on June 1, 2020, thousands of people staged a mostly peaceful demonstration to protest George Floyd’s murder. Federal agents and others broke up the protest with horses, teargas, flash bang grenades and pepper balls, while a military helicopter swooped low.

Yep, that would be the answer to the brain teaser.

Trump did not win and what happened on Jan. 6, when an overwhelmingly European American mob, goaded by Trump, stormed the Capitol, was what Yale professor Timothy Snyder, in an interview with HuffPost’s Lee Moran, called “a failed coup [that was] a trial run for a successful coup.” President Biden, speaking on Oct. 21 on the 10th anniversary of the establishment of the Martin Luther King Jr. Memorial in Washington, D.C., saw it as a high point of a “through-line” of racism starting with slavery.

But Biden has also repeatedly warned that what is at stake is not just party supremacy but the survival of democracy. “Autocrats believe that the world is moving so rapidly that democracies cannot generate consensus quickly enough to get things done,” Biden said in a speech on Oct. 15 in Connecticut. China’s Premier Xi Jinping, he said, does not “think democracy can compete because [it] can’t react quickly enough.” The same for Russia’s President Vladimir Puti. “They’re betting democracies can’t compete, [that] we can’t move quickly enough.”

Biden was echoing remarks during a White House press conference on March 25, when he said, “It is absolutely clear … that this is a battle between the utility of democracies in the 21st century and autocracies. If you notice, you don’t have Russia talking about communism anymore. It’s about an autocracy, [about] demand decisions made by a leader of a country.”

Those who follow Trump blindly, although he was clearly headed down the path to that autocracy, should pay heed, including those in South Florida’s Cuban American community who have been brainwashed into believing that Biden and the Democrats will turn the United States into a communist state, just like the one which they fled, journalist Lautaro Grinspan reported in HuffPost.

“Misinformation targeting Latinos comes from different sources, from chats on popular messaging platforms like WhatsApp to Facebook pages and Latin American YouTube channels” Grinspan reported. “Many of these platforms translate conspiracy theories that originated in English into Spanish. But when that misinformation — from unsupported claims about election fraud to anti-vaccine propaganda and everything in between — makes the leap onto Miami Spanishlanguage radio (a space dominated by Cuban Americans, a key Republican constituency in Florida), it receives a mainstream stamp of approval from stations that have, in some cases, been a part of people’s daily routines for decades.”

Grinspan identified two Republican Congresspersons, who, he said, trafficked in such conspiracy propaganda. One is Maria Elvira Salazar, who, he said, claimed on Radio Mambí that 200,000 more people voted in Pennsylvania than there were on the electoral rolls. That, Grinspan, noted, is “a repeatedly debunked conspiracy theory based on incomplete data.”

Carlos Gimenez, Grinspan added, not only did not correct the record on Actualidad Radio when it was claimed that the Biden administration was admitting thousands of unauthorized immigrants as part of a “Machiavellian plan” to turn them into Democratic voters, saying ‘I don’t doubt it.’” Political leaders should be telling their supporters that President Dwight Eisenhower and President Lyndon Johnson also faced accusations that their social agendas were intended to usher in communism, whereas they sought to help the poor, tens of thousands of whom live in Salazar and Gimenez’s Miami-area districts and will benefit from Biden’s agenda and that the falsehoods are instigated by the corporate and wealth classes.

They should also be telling their supporters that the real threat to American democracy is the one Biden is warning about and that curtailment of fundamental rights would come not through some communist bogeyman but from those who want to seize power and use it to fashion a state in which all opposition is crushed. A good primer on the subject is Yale professor Timothy Snyder’s book “On Tyranny.”

It is a struggle that has had terrible consequences for some developing countries, notably Brazil, and is threatening democratic governments in about a dozen European nations, including some where European American “nationalists” are forging close relationships. None of the “nationalists” are preaching communism or even socialism. Dictatorship does not have to come wrapped in red or pink.