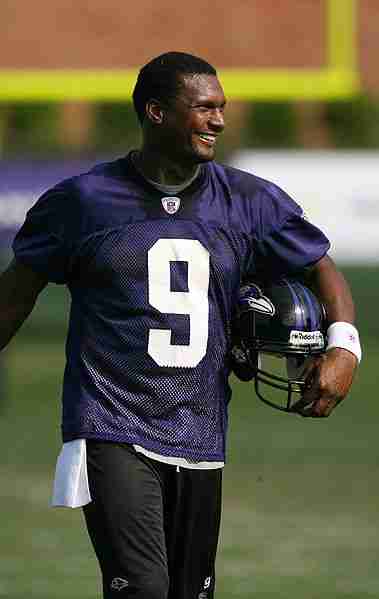 By MELANIE BALAKIT
The Tennessean

Brentwood Academy student Tyler McNair wrangled over the question before his senior year of high school.

He was a starting player for the school’s state championship basketball team.

He was 6-foot-4, an athlete, the son of the late Titans quarterback Steve McNair, one of the biggest athletes to ever play sports in Nashville.

But dance, McNair says, tugged at his heart.

One night, while he wrangled with the tough decision, his father appeared in his dreams.

“Tyler told me once that his dad talks to him in dreams,” his mother, Mechelle, said.

“He’ll ask him questions like, `What do you think I should do?”’ she said.

“Tyler told me, `I think my dad is OK with my dancing and he would still be proud of me,’ “ she said.

Steve wanted his children to pursue their passions, Mechelle said. She also was supportive of her son’s decision.

“His dad would say if they ever wanted to do something other than sports, let them do it. A lot of people will make them play basketball or football because they’re athletes. It’s not fun if they’re doing something they don’t want to do.”

From basketball court to dance floor

It’s hard to ignore the younger McNair’s presence on the dance floor.

His long frame and wingspan stand out from his female teammates.

McNair executes turns and jumps with precision and power.

Loud pop music fills the school’s dance studio. The team rehearses for a performance for a basketball game.

Last year, McNair was a starting player on the court. This year he’s dancing there.

“He could defend any position on the floor,” said Brentwood Academy basketball coach Hubie Smith. “He was our best, if not one of our best, defenders.

“I was afraid he’d regret it. I never coached a kid who didn’t finish his senior year,” Smith said.

McNair was hesitant to leave his team as well.

“Eventually I just decided to just stick with dance because it was something that I thought about all the time,” he said. “Like, I was always trying to work things around dance. And for me, I made it my decision to make it to the next level of dance.”

Boys can dance, too

Before McNair danced competitively, he danced as a hobby.

It was also his stress reliever.

Dance helped him through hard times, like the death of his father. McNair was 10 years old at the time.

McNair says he feels a mix of emotions while he dances.

He feels joy. He feels happiness. And with the support of his school community, he also feels a sense of accomplishment.

“I feel like I’m proud to make the decision to dance,” said McNair, the dance team’s first male dancer.

“It shows that boys can be dancers, too,” he said. “It’s not just for girls.

“I can do the same thing they do but make it look masculine and make it look just as precise as they can,” he said.

McNair’s former basketball teammates and his dance teammates have embraced his decision.

Garrett Suedekum, who has been best friends with McNair since seventh grade, played on the basketball team with him.

“I’ve always asked him, half-heartedly joking, if he wants to come back,” Suedekum said. “We know where he wants to be, and he’s doing what he wants to do.”

Suedekum and other friends have cheered at McNair’s dance performances.

His teammates have been dancing since age 4. McNair started formal dance training six months ago.

“I would look up videos for turns,” McNair said. “I would watch TV, like `Dance Moms’ and stuff like that, and try to mirror what they would be doing.”

After basketball practices – usually done by 6 p.m. – McNair headed to the school’s dance studio by himself.

“I kept thinking, `OK, he is probably exhausted from a long day of school and basketball practice,’ “ Kennedy said.

“But he would just come to dance. The more that I saw that, the more, of course, I would watch that – I would stay late just to watch, too,” she said.

McNair landed a spot on the school’s dance team. Then he made the cuts for state championships.

McNair was nervous at the state championships.

McNair added: “In my mind, I had so much to prove. I left a state championship team and I wanted to contribute to another one.”

The team won state championships in the fall, and now they’re headed to nationals.