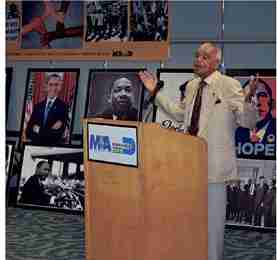 Reeves, 97, was interviewed by Derek Davis, curator of the Old Dillard Museum of Fort Lauderdale, in the second of the Archives’ “Icons” quarterly series designed to allow people to hear the experiences of blacks who have made a contribution to advancing the condition of African Americans.

Reeves is best remembered as the second-generation publisher of The Miami Times which had its start in 1923 and grew into the largest circulation black weekly in the South. (Disclosure: This writer worked for nearly 15 years at The Miami Times.)

But the Bahamian native, who came with his family to Miami when he was eight, definitively stamped his mark on civil rights by helping to challenge entrenched racial discrimination that led to the desegregation of the then city-owned golf course and Miami-Dade County’s beaches.

He also spearheaded an initiative which, he told the 100 or so in attendance Sunday, led to better conditions to then all-black schools, and also brought about better conditions at the county hospital for black patients.

The “Icons” series featured the Black Archives founder and chief archivist Dorothy Jenkins Fields in May and is held at the 100 year-old Lyric Theatre which has been painstakingly refurbished over the years into a showpiece in the city at 819 NW Second Ave. in the heart of historic Overtown.

Fields led the campaign for the renovation and she was visibly emotional as she made introductory remarks Sunday over the efforts of David and current Archives head Timothy A. Barber and those who donated to the project. Sometimes, she recalled, there was no money to pay Davis and, later Barber, “but they kept on showing up for work.”

Reeves, gently prodded by Davis, said his father, Henry E.S. Reeves, a master printer in Nassau, Bahamas, came to Miami to buy equipment but stayed and opened his own printery in 1919. He launched the Miami Sun newspaper to give a voice to black Miamians but it folded after a few months. The Miami Times took its place in 1923 and has been published continuously since then.

The younger Reeves candidly admits that after he graduated from Florida A&M University in his 20s, he chose to work with the printing operation because the newspaper was not making money.

He told the Lyric audience that his attitude changed after he spent four years in the military and returned home to find that even though he “could have been killed … the war didn’t change anything” in America. He saw The Miami Times as a vehicle to bring about the change that had not arrived.

His was a two-pronged approach. While the newspaper publicized what he saw as “the many flagrant violations” of the rights of African Americans, he himself became personally involved in the struggle for equality. A leader of an activist group

the Rev. that also included the late civil rights crusader Theodore Gibson, Reeves took on discrimination at the golf course. He said blacks were allowed to play only on Mondays – the day when the course was watered.

After repeated demands on the city to remove the restrictions, the group filed a series of lawsuits that ultimately reached the Supreme Court and was resolved in their favor after seven years.

“It was a landmark decision,” Reeves recalled. The court, he said, ruled that the city could not tax residents and then restrict them from city facilities.

Next on the list was a restriction on blacks going to the county’s then 28 beaches. At the time, he said, they were limited to Virginia Key Beach, which was poorly kept. The Reeves group again tried to reason with the authorities but with no success. Members finally took direct action by one day going to the much better beach at Crandon Park and wading into the water.

“There were police there to stop us when we went to the bath house to change so instead of going there we went directly to the beach,” he recalled. “We expected to be beaten up or harassed but nothing happened. The beaches were all open to us from then on.”

Reeves explained that, generally, his approach was to try to reason with officials. Answering a questioner, he said, “There are always some good white people and you need those people. But you cannot reason with the hoodlums who want to beat you up.” Much of what was accomplished, he said, was with the help of these “allies” and members of the Jewish community.

But it was evident during the “conversation” that, in his twilight years, Reeves is dismayed at what he sees around him. He predicted that black newspapers will soon disappear, explaining that the number has dropped from a high of 200 to about 50.

“We are not going to last too long,” he said. He was also clearly in anguish over the state of the black community today, singling out crime as the biggest problem, along with drugs and guns.

“Young people have too many guns,” Reeves said, “and drugs are too rampant. [The young people] don’t value life. We need to do something about guns.”

The next event at the Black Archives Historic Lyric Theatre Cultural Arts Complex will be a “Presidential Debate Watch Party” on Monday, Sept. 26, with doors opening at 7:30 p.m. and the debate starting at 9 p.m. The debate between Presidential candidates Democrat Hillary Clinton and Republican Donald Trump will be aired.

Previous post The Politics of Blackness: Why do you call me names?