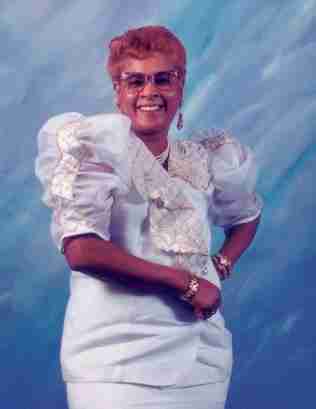 According to her daughter Nichelle Williams, Miles reportedly succumbed to an asthma attack shortly after struggling for breath while getting dressed for Sunday services at Redemptive Life Palm Beach Church, where she was chief administrator and executive assistant to her sister and brother-in-law, Pastor Brenda Ray and Bishop Harold Calvin Ray.

Miles, who arrived to the Palm Beaches from Connecticut in 1990, passed at age 78.

She served as the “central nervous system” of the ministry for more than 31 years, including coordinating events large and small, with speakers famous and otherwise. Miles knew the ins and outs of the ministry like no one else, and the pastors relied heavily on her keen sensibilities. No sense in trying to ﬁll the void left by Miles, said one parishioner, “There will never be another Elder Fern.”

Church and family members said they were heartbroken over the passing of a loved one and a ministry mega-worker who looked after them in ways untold.

“It was such a shock to me because she was such a pillar,” said her younger sister, Pastor Brenda Ray, who said Miles basically raised her in the absence of their mother while growing up in Texas. “She was such a discerner of people. She was my greatest conﬁdante. I’m heartbroken, but it’s heaven’s gain,” said Ray.

Pastor Brenda, who is respected as a prophet across the nation (she has noted that she foresaw 9/11 before it happened), said she received prophetic insight about her sister’s death at about 3:14 a.m. the morning she passed.

But she wasn’t aware of whom the words were in reference. She said she received a word from the Lord that “she wouldn’t make it and that He was bringing her home.” She said God spoke those words to her but she wasn’t given a name. She later realized it was in reference to her sister, when Miles passed at 10:14 a.m. that morning.

Miles’ daughter said she too received prophetic insight about her mother’s impending passing. Nichelle Williams said throughout the month of June, she “mistakenly” kept writing the number seven (referencing July) instead of June on work and other papers. It reached the point that she told coworkers she sensed a major change was coming in July. Williams said it was apparently her mother’s upcoming death of which she was given foresight.

Williams said that when she was young and had to have 17 surgeries for a rare hip disease, her mother moved the family from Texas to Los Angeles to get care for her ailing child at the Los Angeles Children’s Hospital. Miles secured grants and received help from the Jerry Lewis Telethon to care for her daughter. Williams said her mother laid it all on the line for her, and in turn, she would give her all for her mother.

“I lived and breathed for my mother,” said Williams, 54, the second oldest of three children. “She was my hero.”

Heroic and a mother ﬁgure to those both near and far is how many described Miles.

Bishop Harold Calvin Ray, founder and senior pastor of the ministry, and technically Miles’ supervisor, said she was invaluable. He said Miles often could foresee issues, problems and concerns before he would, and was already working to put out the ﬁres beforehand. Ray said her dedication to him, her sister, and the church was immeasurable.

“To me, she was not only my trusted administrator for over 31 years, she was my big Sis, my conﬁdante, my friend, who I knew had my back in good times and bad,” he said.

“Over the years she gained wide respect from ecclesiastical, governmental and corporate leaders around the world, as she interacted with them on our behalf,” Ray added. “Obviously the loss both personal and professionally is immeasurable.”

Miles’ only son, Anderson Louis Montgomery, 50, in offering perspective regarding his mother, he said, she is:

Miles is survived by her three children, Terry Taylor, 59, Nichelle and Anderson, a host of loving grandchildren, great grand and great-great grandchildren. Her parents, Raymond Pikes, II and Willie Alice Curtis, preceded her in death. She leaves ﬁve siblings and three siblings predeceased. Also cherishing her memories are many additional family, friends, parishioners and ministry workers, locally, nationally and internationally.