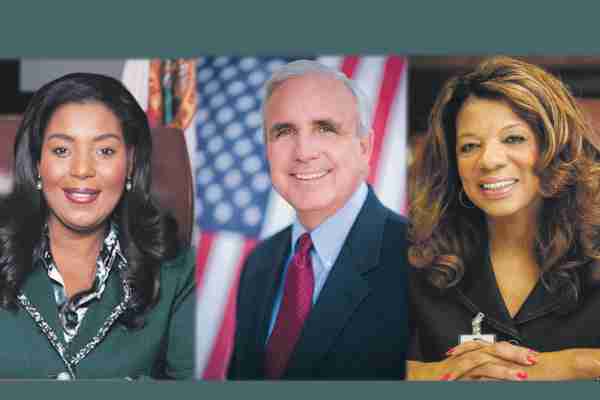 The first African-American female mayors of two local counties are reflecting on the progress made and the challenges faced serving their respective year-long terms nearing an end in November. Broward County Mayor Barbara Sharief and Palm Beach County Mayor Priscilla Taylor both said that much has been accomplished during their tenure.

Carlos A. Gimenez is mayor of Miami-Dade County which completes the tri-county area but has never had a female mayor.

However, Sharief said there are challenges being an African-American woman in such a high profile position. “As an African-American woman and business owner, I think it comes with its own set of challenges when you get into the
public arena,” she said. “People do tend to attack you more and I think it’s par for the course right now, down here in this political climate in South Florida.”

Right before last month’s election Sharief reportedly got into a verbal altercation with Rep. Daphne Campbell, D – Miami. Sharief claimed Campbell’s brother-in-law pulled a gun and a report was later filed with the Broward Sheriff’s Office. Despite the incident, Sharief was reelected August 26 for another four-year term as county commissioner of District 8. “It’s been a very busy year for me because I’ve tried to be in all parts of the county (and have) a reelection campaign going at the same time,” she said.

Taylor will have the opportunity to run one last time for reelection in 2016 to keep her District 7 seat due to term limits. She said women in politics who hold significant positions have to work harder to prove themselves. “I’ve been able to rise to chair and mayor (of Palm Beach County). I was in the (Florida) legislature. I was speaker pro-tem,” she said. “When we as women get into these positions, we have to show that we can lead as well as the males.”

Taylor said African-American women excelling in politics sets a good example for today’s youth. “It’s always good for our young people to see the possibilities. It’s great for our children to see other people, minorities excel because that shows them that they can do the same thing,” she said. “You have to set an example for the young people and I think that’s what we all aspire to do.”

A disparity study will be conducted to give all interested parties the opportunity to do business with the county, Taylor said.

Palm Beach County is trying to encourage entrepreneurship because many people are not making enough money for living expenses, she said. “We have to give opportunities to our young people because our young people go off to college,” Taylor said. “They try to get jobs with the county and they can’t, so they go elsewhere.

Equality is paramount and also to have jobs.” Sharief said in Broward, the unemployment rate is between 5 and 5.2 percent, and over a billion dollars has been invested into the local economy for capital improvements. She said the Fort Lauderdale – Hollywood International Airport expansion will help create new jobs. The grand opening is scheduled for Thursday, Sept. 18 and will reportedly increase the airport’s capacity by providing a second runway which would be able to accommodate large commercial jets.

“At the airport we’re looking at jobs, valet, concierge and hotel services and increases in the service industry professionals,” Sharief said. In addition, she said the All Aboard Florida train station project, an express passenger rail service connecting Miami to Orlando, has been given the green light for Broward County as well. “We have done the groundbreaking on the All Aboard Florida train station, which will be in downtown Fort Lauderdale next to the governmental center,” Sharief said. “That will connect our residents in Broward (county) to Orlando and Miami and any other places where the train stops on the way up to North Florida.”