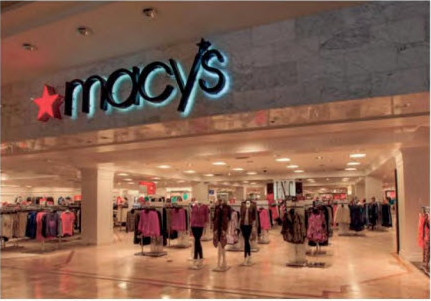 NEW YORK (AP) — Macy’s announced a multiyear money-saving restructuring program that it says will shrink its management structure and make the department store more nimble in a fiercely competitive environment.

The plan, unveiled Tuesday, would result in annual cost savings of $100 million and include the elimination of 100 vice president positions.

The latest moves to shrink the business come as the department store chain reported a drop in profits and total sales during the critical fourth quarter as well as meager growth in sales at established stores, a key measure for a retailer’s health. The company’s results only beat Wall Street expectations because they were lowered after the department store chain announced sluggish holiday sales last month. It also forecast on Tuesday that sales at stores opened at least a year would be anywhere from unchanged to up 1 percent for the current fiscal year.

A strong economy and Macy’s reinvention efforts have helped produce a string of quarterly increases at established stores after a three-year sales slump. But that momentum is fizzling.

Macy’s as well as several other department stores struggled through the holiday season after a strong start. That called into question whether such mall-based chains can compete in a changing landscape where shoppers are shifting more of their spending online. It also is putting pressure on Macy’s and others that they need to do more to compete in the age of Amazon.

“The problem for Macy’s is that if it cannot deliver a strong set of numbers against the backdrop of a good consumer economy, its fortunes for the upcoming year — when economic growth will cool — do not look good,” said Neil Saunders, managing director of GlobalData Retail, in a report. “In our view, this underlines the fact that Macy’s has still not successfully created a true destination status and has still not got to grips with many of the issues plaguing its stores.”

Macy’s, like many other mall-based stores, is under pressure to reinvent itself as shoppers increasingly buy online. Macy’s has been expanding its store labels and opening more off-price Backstage stores — it now has more than 120 new Backstage locations within Macy’s stores. It’s also rolled out technology that allows customers to skip the line at the register. It’s also expanding virtual reality technology in furniture and cosmetics sections. The company’s revamped loyalty card program has helped keep its best customers engaged. And after closing more than 100 stores over the past several years, it’s going to see how a cluster of smaller stores work with today’s customers.

Macy’s said Tuesday that it will add Backstage locations to 45 more stores. It also plans to renovate another 100 Macy’s stores with better lighting and other touches. It aims to enhance Macy’s app with new features to improve payment, shopping, and style advice. Mobile is Macy’s fastest growing channel, with more than $1 billion in sales through its apps alone in 2018, the retailer said. The company also plans to further invest in areas where it already has strong market share. That means dresses, fine jewelry, big ticket, men’s tailored clothing, women’s shoes and beauty.

“The steps we are announcing to further streamline our management structure will allow us to move faster, reduce costs and be more responsive to changing customer expectations,” said Jeff Gennette, Macy’s CEO, in a statement.

It still needs to do much more like making its stores more exciting, analysts say.

Sales at stores opened at least a year rose 0.7 percent in the quarter and 2 percent for the fiscal year. That figure includes business from licensed departments.