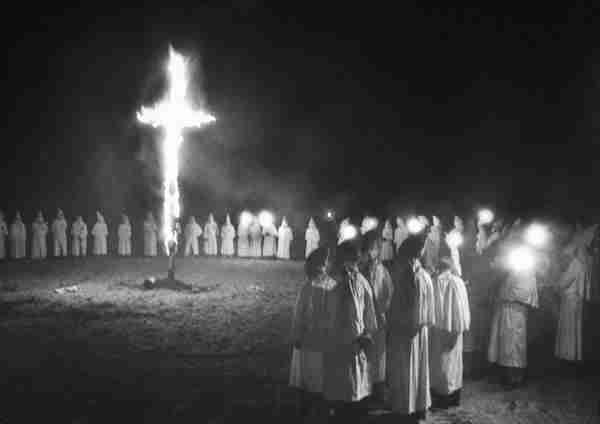 FRUITLAND PARK, Florida (AP) – Residents of this small town have been stunned by an investigative report linking two city police officers with the Ku Klux Klan, the secret hate society that once was violently active in the area.

The violence against African-Americans that permeated the area was more than 60 years ago, when the place was more rural and the main industry was citrus. These days, the community of less than 5,000 residents northwest of Orlando has been infused by the thousands of wealthier, more cosmopolitan retirees in the area. Those who live in the bedroom community, which is less than 10 percent black, have reacted not only with shock, but disgust that officers could be involved with the Klan, the mayor said.

“I’m shocked, very shocked,” said Chery Mion, who works in a Fruitland Park gift shop next door to the mayor’s office. “I didn’t think that organization was still around. Yes, in the 1950s. But this 2014, and it’s rather disconcerting to know.”

Mayor Chris Bell says he heard stories about a Klan rally that took place two years before he arrived in the 1970s, but he has never seen anything firsthand. As recently as the 1960s, many in law enforcement in the South were members but “it’s exceedingly unusual these days to find a police officer who is secretly a Klansman,” said Mark Potok, a senior fellow at the Southern Poverty Law Center, which monitors hate groups.

Five years ago, Ann Hunnewell and her Florida police officer husband knelt in the living room of a fellow officer’s home, with pillow cases as makeshift hoods over their heads. A fewwords were spoken and they, along with a half-dozen others, were initiated into the local chapter of the Ku Klux Klan, she says.

While the Klan used to be politically powerful in the 1920s, when governors and U.S. senators were among its 4 million members, nowadays it is much less active than other sectors of the radical right and has less than 5,000 members nationwide, Potok said.

Last week, residents were told Borst and the Hunnewells had been members of the United Northern and Southern Knights Chapter of the Ku Klux Klan, though its presence in their town wasn’t noticeable. The Florida Department of Law Enforcement sent the police chief a report linking the officers to the Klan based on information from the FBI. Both men didn’t return repeated phone messages to their homes, but Borst told the Orlando Sentinel he has never been a Klan member.

Ann Hunnewell _ who was a police department secretary until 2010 _ told Florida investigators that former Police Chief J.M. Isom asked her and her ex-husband to join the KKK in 2008, trying to learn if Elkins was a member. Isom, though, shortly after Elkins resigned, also quit after he was accused of getting incentive pay for earning bogus university degrees.

Police Chief Terry Isaacs said he took a sworn oath from Isom, who called Ann Hunnewell’s account a lie, and that there was no record of such an undercover investigation.

The disclosure of the officers’ Klan ties harkened back to the 1940s and 1950s when hate crimes against blacks were common. That era was chronicled in the 2012 book “Devil in the Grove.” Then-Lake County Sheriff Willis McCall shot two of four black men, dubbed the “Groveland Four,” who were dubiously charged with raping a white woman.

Next post Revamped OL will be Dolphins' focus in camp