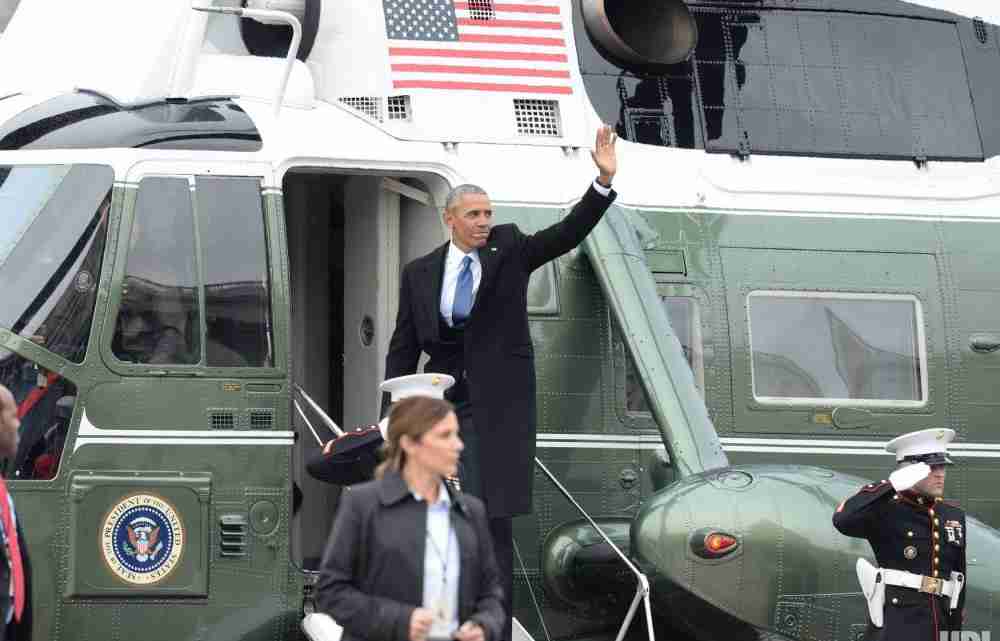 Former President Barack Obama gives a final wave before getting aboard a helicopter after Donald Trump’s Inauguration. Photo courtesy of upi.com.

By JOSH LEDERMAN and DARLENE SUPERVILLE

WASHINGTON (AP) — Former President Barack Obama exited the presidency on Friday with a message of gratitude to Americans and a plea to his supporters not to be bowed by the inauguration of President Donald Trump.

“You proved the power of hope,” Obama said before departing Washington as a newly minted ex-president.

In a farewell speech at Andrews Air Force Base before boarding the presidential plane for the last time, Obama said he’d been met by skepticism and doubt throughout his eight years in office by some who “didn’t think we could pull it off.” Obama said his supporters had transcended the obstacles posed by entrenched political powers by finding bonds of unity with Americans of all stripes.

He called that kind of fortitude “hope in the face of difficulty.”

“Michelle and I, we’ve just been your front-men and women,” Obama said. “It has always been about you, and all the amazing things that happened over these last 10 years are really just a testament to you.”

Then Obama, a broad grin on his face, said goodbye to a crowd of 1,800 gathered to bid him farewell. He stopped to give hugs and handshakes to staffers and military members who had served his administration over two terms.

His last day in office started like any other: in the White House residence with his family. Yet by mid-morning, Obama and his wife were welcoming Trump and incoming first lady Melania Trump to the White House for a reception before accompanying them to the Capitol for Trump’s swearing-in.

If Obama was feeling bitter about Trump’s victory, he didn’t show. He wrote a welcome note to Trump that he left in the Oval Office, and smiled as he stood alongside Trump at his swearing-in.

“This is just a little pit stop,” Obama said minutes later at the air base. “This is not a period, this is a comma in the continuing story of being an American.”

Trump, too, avoided any negativity about the man whose citizenship he once questioned.

“We are grateful to President Obama and first lady Michelle Obama for their gracious aid throughout this transition,” Trump said in his inaugural address. “They have been magnificent.”

Obama and his wife boarded a helicopter and flew to the air force base to speak to supporters in an airplane hangar. He and Mrs. Obama then walked a red carpet up to the steps of the presidential aircraft that ferried him on so many trips around the world. This time, though, it was designated a “special mission” instead of Air Force One, because the sitting president was not on board.

Obama and his family were to arrive later Friday in Palm Springs, California, where they’ll have their first vacation as private citizens. The Obamas will return on an unspecified date to Washington. The family has rented a home where they plan to live until youngest daughter Sasha finishes high school.

There was one final throwback to Obama’s celebrated campaign chant as he exited the national stage. It started as a shout from supporters as Obama arrived at a base, then was repeated by the president as he finished his speech.

Next post Steve McNair's son leaves basketball behind for dance