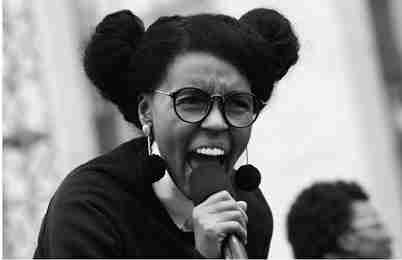 WASHINGTON — If you wondered where many of Hollywood’s A-list celebrities had gone during President Donald Trump’s inauguration, you didn’t have to wonder any longer on Saturday, when scores of them showed up at huge women’s marches in Washington and other cities to send the new president a pointed message that he was in for a fight — and that, as so many signs said, women’s rights are human rights.

Madonna, Julia Roberts, Scarlett Johansson, Cher, Alicia Keys, Katy Perry, Emma Watson, Amy Schumer, Jake Gyllenhaal and feminist leader Gloria Steinem were just some of those at the march in Washington, where officials said the crowd could number more than half a million.

In the capital, a sea of pink, pointy-eared “pussy- hats” mocking the new president stretched far and wide as Madonna took to the stage — and, to no one’s surprise, held little back.

“Yes, I have thought an awful lot about blowing up the White House,” she said. “But I know that this won’t change anything. We cannot fall into despair.” Instead, she called for a “revolution of love.”

The pop icon Cher, speaking in an interview backstage, said she hoped people could now mobilize against Trump the way they mobilized against the Vietnam War.

“I think people are more frightened than they’ve ever been,” the 70-year-old singer said. “Everything that we gained, we’re just watching slip away. It’s not only one thing, it’s everything — the progress that we made is all going away.” Asked whether she thought the new president would hear the message of the march, she replied: “I don’t care what he’s hearing. It’s important what the people are hearing. He’ll hear it, but he won’t pay attention.”

Actress Edie Falco, of “Sopranos” and “Nurse Jackie” fame, noted: “Everyone I know is here today.”

“Nothing has ever felt this important in my life- time,” she said. “We’re not just going to say, ‘it’s OK,'” she added of Trump’s agenda. “Because it’s not OK.”

Actress America Ferrera told the thousands assembled that they were marching “for the moral core of this nation, against which our new pres dent is waging a war. Our dignity, our character, our rights have all been under attack, and a platform of hate and division assumed power yesterday. But the president is not America. … We are America, and we are here to stay.”

The Washington march included plenty of men, too — some of them wearing “pussyhats” in solidarity. Among the performers were soul artist Maxwell and Janelle Monae.

“It’s because of women that we’re all here,” Maxwell said. “I’m so happy to say that I was here for the women. This is one for the books.”

In New York, Goldberg told a cheering crowd that “what’s at stake is everything you believe in … We’re going to show America what we can do in New York.”

In Park City, singer John Legend and actors Benjamin Bratt and Jason Ritter, along with actresses Theron, Stewart, Maria Bello and Laura Dern, were among an estimated 8,000 people who turned out with Handler. “Love, not hate, will make America great,” they chanted.

Handler acknowledged that although Trump had been elected president, “the only thing you can do when you’ve been set back is to step forward and continue to fight.”

In Washington, Oscar-winning actress Patricia Arquette carried a sign that said, “Put Women in the Constitution.” She said she was concerned about a host of social issues under the new administration and Congress, among them the possibility that the arts would lose federal funding.

“The arts is our culture,” she said. “A lot is at stake. … We need to be heard and respected. They need to know we are a force to be reckoned with.”

Actress Jackie Cruz of “Orange Is The New Black” also spoke about the importance of the arts, saying that as a teenager, “the arts saved my life.” And Cher, too, spoke of how the arts transformed her youth. “When I was growing up, I was dyslexic and I did horribly in school — but singing was my passion,” she said. “Other things are important, but art feeds your soul.”