What happened to Notre-Dame’s precious art and artifacts? 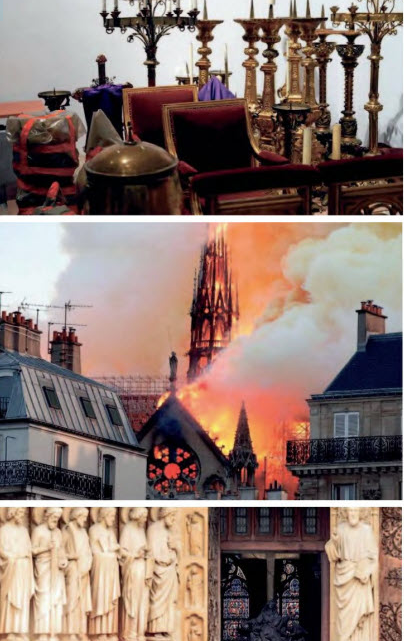 PHOTOS COURTESY OF SMITHSONIAN MAGAZINE AND YOUTUBE.COM AND ARTSY

People around the world watched with heavy hearts as a fire tore through the Notre-Dame Cathedral in Paris yesterday. It took firefighters 12 hours to extinguish the flames. When all was said and done, the cathedral’s iconic spire collapsed, its roof has been destroyed, but not all was lost in the blaze.

On Tuesday, officials announced that an initial inspection suggested the cathedral is structurally sound. And as Emanuella Grinberg and Jack Guy, report for CNN, many of the treasured relics, paintings, sculptures and artifacts that were housed inside Notre-Dame appear to have survived.

The Paris Fire Brigade said in a tweet that the “main works of art” were rescued from the cathedral. Franck Riester, France’s culture minister, posted photos of the evacuation efforts. “Agents of the culture ministry, aided by the archbishop’s staff, the Paris fire brigade and the security services, are evacuating the works inside the cathedral,” he wrote yesterday, per a translation by the Guardian’s Jon Henley and Naaman Zhou. “They are being progressively brought to safety.”

Jean-Francois Martins, Paris’ deputy mayor for tourism and sports, told CBS News that public servants on the scene formed a “human chain” to get the items out of the cathedral as quickly as possible. Among them was Father Jean-Marc Fournier, chaplain of the Paris fire department, who reportedly rushed into the building to save two of its most precious relics: the Crown of Thorns, which is believed to have been placed on Jesus’ head during the crucifixion, and the Blessed Sacrament, items for church services representative of Jesus’ blood and body.

A nail believed to have been used during the crucifixion and a purported fragment of the cross were also pulled from the cathedral, according to the Guardian. A 13th-century tunic said to have been worn by Louis IX, the only French king canonized by the Roman Catholic Chur ed as well.

T t on the Rose Windows, three stunning stained-glass artworks that light up the cathedral. During a press conference, the culture minister said they “don’t appear to have suffered catastrophic damage.”

In a fortunate twist of fate, copper statues of the 12 apostles and four New Testament evangelists were removed from Notre-Dame’s spire just days before the fire broke out, reports the New York Times’ Doreen Carvajal. Badly tarnished, the sculptures had been taken to a warehouse in southwestern France for cleaning and restoration.

Other artworks and artifacts, however, were not so lucky. A depiction of a Gallic rooster—France’s unofficial symbol— that sat atop the spire is in bad shape, according to the Times. A grandiose organ of 8,000 pipes, some of which date back to the Medieval period, was not burned, but it is not yet known if the instrument sustained water damage that might stop it from functioning. Four large-scale 17th- and 18th- century paintings depicting the apostles were at least partly damaged, the Guardian reports. A separate fragment of the Crown of Thorns, along with relics of two saints, are known to have been destroyed.

The condition of many other items is unclear. According to the Associated Press, state employees will have to wait 48 hours before they can enter the cathedral and care for the artworks that are still inside. Those items that have been removed are being transferred to the Louvre and to the Paris City Hall for safekeeping.

While the flames were still burning, French President Emmanuel Macron promised that Notre-Dame would be restored: “I say to you very solemnly this evening: this cathedral will be rebuilt by us all together,” he said as the flames still burned. “We will rebuild NotreDame because that is what the French expect, because that is what our history deserves, because it is our destiny.”

But the road to recovery will not be easy. The effort to rebuild the damaged structure will likely take years and cost billions of dollars. And it remains to be seen how many of Notre-Dame’s original artworks will return to the cathedral once the project is completed.

Next post Morehouse College to admit transgender men starting in 2020